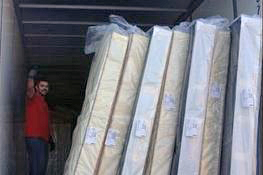 Bridging RVA has partnered with other churches, nonprofits, and individuals to carry out ministry projects, including leading a fundraising campaign to distribute “100 Beds to 100 Kids in 1 Day” in partnership with Beds4Kids, Inc.

God started stirring Dave Kennedy’s heart during the 2013 national conference of the Fellowship of Grace Brethren Churches in Atlanta.

“I went to the  Mobile Learning Labs and saw some nonprofit organizations in operation,” said Kennedy, who is pastor of Community of Grace Church in Richmond, Va. “I was so fascinated by that, and loved the idea of being out among people in need.”

“Interestingly enough, [Sawyer] texted me first, and we found out that God had been working in both of our hearts to get out of our offices and into the lives of needy people,” Kennedy recalls. Both are full-time pastors at their respective churches.

Over the next several months, the two men worked together to discover the needs of their surrounding community and put their vision on paper.  During the summer of 2014, their vision turned into an official nonprofit organization called Bridging RVA, a ministry that reaches out to the metro area of Richmond, “Connecting individuals, groups, and causes for the common good of our community.”

Even though Bridging RVA is an official nonprofit, it wasn’t their first introduction to on-the-ground ministry. Before the two pastors started Bridging RVA, they had already been involved with what they call a “rapid response,” ministry, such as providing blankets and coffee to the homeless on cold nights.

“We were alerted to that need by a Jewish newsman on one of our local TV stations,” explained Kennedy. “We were going to have our coldest night of the season in January [2014] and he just started calling churches and saying, ‘Hey, I’ve heard there are some homeless people behind the shopping plaza and we were wondering if you could do anything to help these people out,” and he kept hearing, ‘No.’ Eventually, the newsman called John [Sawyer] and within hours he mobilized a team of guys from his small men’s group who would provide blankets and coffee and food.”

Bridging RVA is intentionally a non-faith-based nonprofit, which Kennedy says gives the ministry a chance to work alongside of more unchurched people, “not only those who need help but those who want to give it.”

In the last year, Bridging RVA has partnered with other churches, nonprofits, and individuals to carry out ministry projects, including leading a fundraising campaign to distribute “100 Beds to 100 Kids in 1 Day” in partnership with Beds4Kids, Inc. This Thanksgiving they are partnering with  local Starbucks to provide coffee to more than 1,000 people on Thanksgiving Day during a “Giving Heart Feast” at the Richmond Convention Center.

“That’s the greatest thing for us,” notes Kennedy. “People rubbing shoulders with each other, having an opportunity to share Christ with those around them. We’re at the beginning of this, but we believe that the Lord has really blessed us with successful achievement.”

Stories, pictures, and videos can be found at BridgingRVA.com. Follow them onFacebook, or send Pastor Kennedy a letter of encouragement at dave@bridgingrva.com.