After being postponed several times, elections are being held today in the Central African Republic, home to the largest number of Grace Brethren congregations in the world. Below is a portion of a story about the elections from BBC News. Click here to read the complete article. 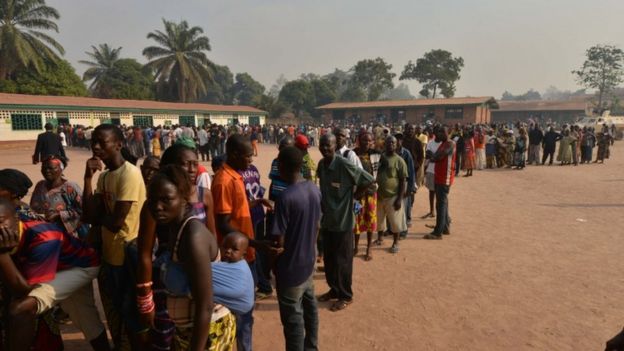 Long lines of people waiting to vote in the PK5 neighbourhood of Bangui, Central African Republic, which has seen lots of violence.

Long queues have formed at polling stations in the Central African Republic’s capital as presidential and parliamentary elections are held to end years of conflict.

UN troops are patrolling Bangui to stop a repeat of the clashes during a recent referendum on a new constitution.

CAR has been torn by sectarian violence since a largely Muslim Seleka rebel group seized power in March 2013.

A band of mostly Christian militias, called the anti-Balaka, then took up arms against the Seleka.

In January 2014, a transitional government was formed but elections have been postponed four times since February 2015 due to insecurity and logistical challenges.