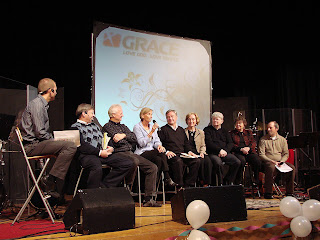 From October 12 to November 2, Grace Community Church, a Grace Brethren church in Mississauga, Ontario, is celebrating its 10th anniversary. In the photo above, from the October 19 service, Elise Adomanis shares memories from the early years of the church. Grace Community Church is the result of the dreams and prayers of many in the U.S. to see a Grace Brethren work in Canada. Sponsored by Grace Brethren Home Missions, Team Canada (comprised of Phil and Beth Bryant, Nathan Bryant, and Bartley and Sarah Sawatsky), moved to the Toronto area in the mid-1990s with the goal of beginning the development of Grace Brethren congregations across the country. They aggressively pursued contacts, using visiting teams from the U.S. to make their presence known in the Meadowvale area of the city.

In the fall of 1998, 13 adult members launched the church at St. Therese of the Child Jesus school. Since that time, the church has moved to West Credit Secondary School and has grown to 300. The church has also launched two other churches over that time, the Village Community Church in Milton and Community of Hope in Surrey, B.C. This fall the church is launching two new international ministries: Manantial, a Hispanic work led by Willy and Mary Sanchez, and Viva Brasil, a Brazilian ministry led by Armando and Odila Padovan.

The church, now numbering about 300, is celebrating God’s blessing over four Sundays. On October 12, the former pastor of the Bryant brothers was the guest speaker. On October 19, seven guests who were involved in the early start of the Canadian adventure were interviewed by Pastor Bartley and Nathan Bryant. Larry and Sherlene Chamberlain, Jesse and Gladys Deloe, Ted and Elise Adomanis, and Pastor Jeff Thornley shared their memories of the launch.

When Larry became executive director of Grace Brethren Home Missions in 1989, it was one of his goals to see the Brethren church move into Canada. Jesse was an administrator at Home Missions at the time and he and Gladys have participated in three summer mission trips, working with the church in its early years. Ted and Elise worked with Grace Community Church from their home in Maryland both in administrative and financial capacities and in onsite visits before moving to the Mississauga area to become a part of the leadership team. Jeff Thornley is the founder and senior pastor of the Waldorf, Md., Grace Brethren Church where both of the Bryant brothers and Bartley interned. They came to Canada directly from their ministries with Pastor Thornley (who also delivered the sermon on October 19).

The 10th anniversary is coincides with the church moving into permanent facilities. They have already taken possession of their new location (6670 Campobello Road) but will not be able to hold services on the premises until construction is finished. Their goal is to be in by late December so they can host their popular Community Christmas Eve service in the new building.

During the month-long celebration, the church is hosting numerous guests from as far away as Nova Scotia, Washington, D.C., and Vancouver. They are being interviewed each week as the church highlights the different stages of its history. Newcomers to the church will have the opportunity to discover in detail how the church has evolved.

Pastor Bartley Sawatsky invites everyone to attend the celebration. Service times are 9:30 and 11:00 a.m. at the West Credit Secondary School, corner of Montevideo and Battleford in the heart of Meadowvale. 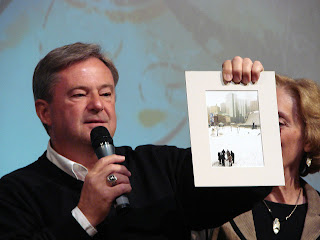 On October 19, Larry Chamberlain, president and chief executive officer of the Grace Brethren Investment Foundation and former executive director of Grace Brethren Home Missions, shares a photo he took of Team Canada praying in a park on an early visit to Toronto. 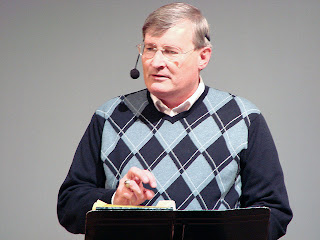 Jeff Thornley, pastor of the Grace Brethren Church in Waldorf, Md., where Philip and Nathan Bryant and Bartley Sawatsky interned prior to moving to Canada, preached during the October 19 service. 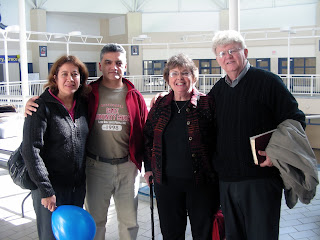 Jesse and Gladys Deloe (right) with Willy and Mary Sanchez. Jesse was an administrator with Grace Brethren Home Missions when the Mississauga church was formed and he and Gladys have assisted the ministry over the years. Willy and Mary lead Manantial, a Hispanic work that has been implemented by Grace Community Church. On Saturday evening, October 18, weekend guests gathered in the new facility to pray. The church hopes occupy the building by late December.