Joe Ortiz, the cross country coach at Mapleton High School in Ohio, didn’t let cancer slow him down. He credits his faith, the school community, and his church, Grace Church, Wooster, Ohio (Nick Cleveland, senior pastor), as helping him get through the illness. A story in the Ashland, Ohio, Times-Gazette last week told more of the story. A portion of it appears below. Click here for the complete article. 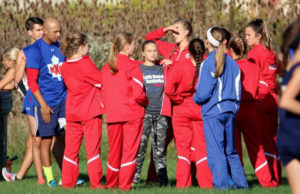 Joe Ortiz, left, a cross country coach in Ohio, was diagnosed with a recurrence of cancer in June. He came back to coach both the boys and girls cross country teams at Mapleton High School and was named Firelands Conference Coach of the Year.

Mapleton cross country coach Joe Ortiz spent the summer of 2017 in two places he never expected — the chemo chair and on a bicycle.

The 37-year-old coach, who had his team’s season planned to the final finish line, found himself with a cancer diagnosis in June that drastically changed the look of his summer and the Mounties’ much-anticipated season.

Ortiz, who led the MHS boys to a state birth the previous fall, received his initial cancer diagnosis in December of 2015 and had surgery to remove the tumor. In 90 percent of cases, the cancer does not come back, but the third week in June, Ortiz’s doctor called and said his cancer had returned as a tumor in his abdomen and chemo needed to begin immediately.

For a dedicated, type-A coach, Ortiz wasn’t going to be inconvenienced by his diagnosis. It became clear, however, that he couldn’t do it on his own.

“My first thoughts were ’OK, let me find out when chemo is and I will still go to practice in the morning,” Ortiz said. ”… I had a very workman’s attitude about it.”

″(But) I learned that I was going to have to find a way to get through the summer with more help than I had ever had,” added Ortiz, who turned to his assistant coaches Dina Gast and Chris Grilley when the demands of chemo were more extensive than he expected.

The duo didn’t miss a beat.

“God has used this experience to open my capacity for empathy for those who are struggling with pain in their life and given me a heart for those who are in a season of hurting,” Ortiz said. “So many people reached out to help during this time, our friends and family, the Mapleton community, our church community (Grace Brethren Church in Wooster), and the running community.”

“It truly was overwhelming the prayers, love, and support we received as a family,” Ortiz added, “and we are excited to be able to do that for others in the future.”