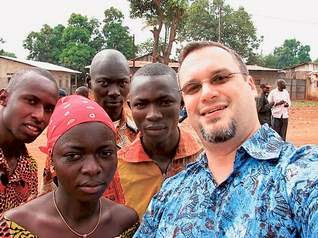 The Mansfield (OH) News Journal today has a feature on the trip Jason Carmean (in photo) took along with AGBM president Joel Richards to the Central African Republic. Jason is pastor of the Grace Brethren Church in Lexington, Ohio. This is an excerpt–to read the entire article click here.

From Oct. 30 to Nov. 14, Carmean, along with another pastor from California, helped train other Grace Brethren pastors in Central Africa.

Carmean said the African churches were growing so fast that pastors couldn’t keep up.

“They’re having to rotate among the different churches,” he said. “I was at a conference this summer and they asked for qualified people who were interested in training more pastors over there.

“I said I was interested, thinking that we wouldn’t be going until some time next year. They called me in September and I left in October.”

Upon stepping off the plane, Carmean said, he was shocked at the level of poverty he witnessed.

“It was overwhelming,” he said. “These people live on less than $1 a day there. Many live in huts with no floors — just very, very poor.”