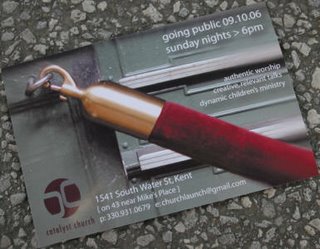 A new Grace Brethren church will launch in 12 days in the Kent State U. area of northern Ohio.

Here are some updates from Jonathan Herron, who is leading the effort to launch the church, which will be named “Catalyst.”

“We have already had three child dedications, two believer’s baptisms via triune immersion, and 54 people at Catalyst last night – all via word of mouth!

“It can only be God – With the help of the Acts 29 Network and Grace Church in Macedonia, we’re launching a new church in the least-churched county in Ohio (Portage County) in its largest city (Kent) that is literally known in occult circles around the globe for overt displays of witchcraft, Native American shamanism, and satanic worship.

“Already we’re seeing amazing things happen and Catalyst hasn’t even launched yet… Wow. The Unstoppable Force promised by Jesus in Matthew 16 is stirring… Hang on for the ride!”

More information and updates are available through the Catalyst website at http://www.catalystchurch.cc/