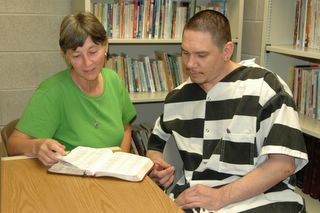 The following article about Peggy Owens, who works in the resources area at CE National in Winona Lake, Indiana, appeared in the October, 2005 issue of “Senior Life” newspaper, Milford, Indiana. It and the photo by Rebecca Whitesel are reproduced here by permission of the paper. Peggy’s church is Winona Lake Grace Brethren Church (John Teevan, pastor).

Every Sunday morning Christians may be found in churches throughout America, but Peggy Owens of Warsaw goes to a different place to worship. She is part of the Kosciusko County Jail Ministry and not only spends time there Sundays, but Wednesdays as well.

For six years Owens has been taking part in bringing hope into what can be a very somber place. Yes, she missed her regular church’s services at first, but now feels quite at home in her main place of ministry.

Owens explains how it was she came to be involved. It started when she went to a conference for ministry teams.

“While I was there the leadership asked the question, ‘What percentage of your time do you spend with people who don’t know God?’ and I was very ‘churched’ and I was teaching piano students from my church, and I was teaching a Bible study, and I worked at a Christian organization, and all the people I knew were already Christians . . . ” she relays.

The question challenged her to move out of her comfort zone. She heard of the need for volunteers with the jail ministry and started playing keyboards with the small group led by John Boren that ministers in jail. “Pretty soon I was hooked,” Owens declares.

She has a real love for those who are incarcerated. “I see them as people who have families and really want them to love Christ,” she says. “I think I have a grandmother’s heart,” Owens says, noting her age of 61 is an advantage in this kind of ministry.

Grandmothers tend to take time and listen, something those who have experienced tough times really need. For example, the day of the interview, Owens had talked with a guy who thought God had forgotten about him. They prayed together and went through Scriptures.

Sometimes Owens helps individuals in other ways. One time a man’s wife was due to deliver their baby so she made a call for him and found out his wife was already in labor. She’ll arrange to bring them their reading glasses, etc. One recent urgent request was to look up a word for someone – “shekinah” – “God’s presence.” She takes pictures of their baptisms and bakes goodies.

“When people get out, I disciple the women if I can,” Owens states.

There is discouragement, but some real good things, too. Owens tells the story of a farmer who was in jail and desperately needed rain for his crops back home. They prayed together that it would rain and rain came.

She later received a letter from him about rich soil, the soil of a heart that has received God’s Word and it has taken root. The man had come to realize that whatever happened at his court date was in God’s hands. “Those are the rewards, they’re great rewards,” Owens says about knowing that faith is making a difference in a person’s life.

“When they change, they’re not so angry anymore,” she says. She wants them to have hope. “My goal is to someday be in heaven with them.”