The 10th anniversary of Grace College’s Center for Lakes and Streams is noted today with an article at the online news site, InkFreeNews. A portion of the story appears below. Click here to read the complete article.

CENTER FOR LAKES AND STREAMS WORKING TO PROTECT COUNTY LAKES 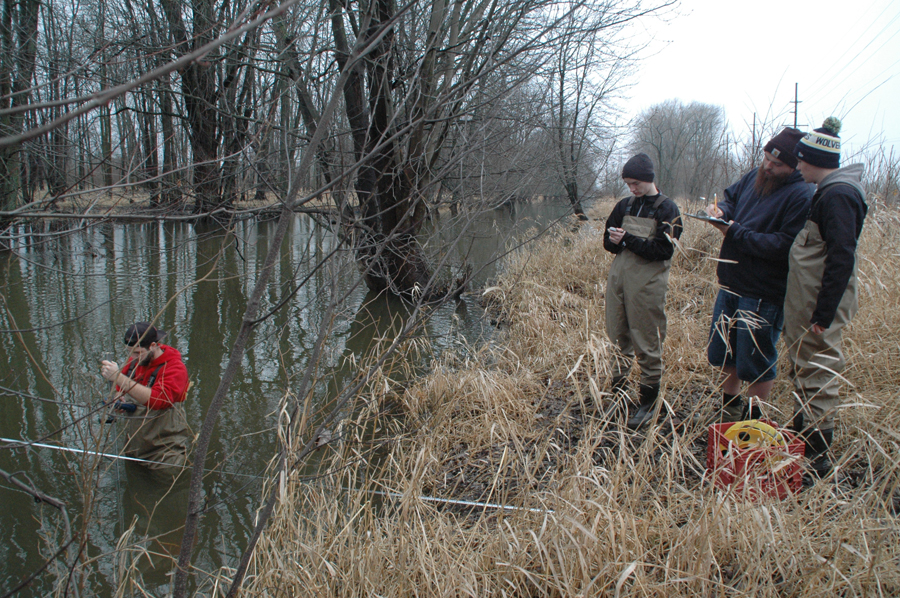 Stephen Becker, far left, research coordinator for Grace College’s Center for Lakes and Streams, took samples in a stream off US 30 on SR 15 in Warsaw. Becker, a recent Grace College graduate, and his team, from left, Jed Harvey, Ryan Duckworth and Jonah Stouffer, had several stops to make, testing nutrient loads in streams. Becker is using a Quanta meter, which measures water temperature, conductivity and the percentage of dissolved oxygen. (Photo by David Hazledine)

WINONA LAKE — This year marks the 10th anniversary of the founding of Grace College’s Center for Lakes and Streams. In that time, the center has played an increasingly important role in protecting one of Kosciusko County’s most vital resources.

“Our economy is dependent on our lakes being clean,” stated Dr. Nate Bosch, the center’s director. According to an economic impact study conducted by the center, Kosciusko County lakes contribute $313 million annually to the local economy. More than half, $150,722,000, is directly attributable to the lakes: boat sales, boat manufacturing, marinas, recreation equipment and property tax revenue.

Unfortunately, there are threats to the health of lakes such as phosphorous and nitrogen, nutrients which promote the growth of algae capable of releasing toxins hazardous to the health of humans, fish and animals. Phosphorous is of particular concern in Kosciusko County. Consequently, municipalities in the region are under pressure to improve their wastewater treatment plants to remove it. Wastewater bills throughout the region have gone up as a result.

Bosch has seen firsthand what can happen when a lake becomes toxic. He visited Grand Lake St. Marys, the largest inland lake in Ohio, the state that also saw Toledo’s drinking water shut down by blue green algae blooms in Lake Erie.

“It’s a terrible situation,” Bosch said of Grand Lake St. Marys. At the state park, closed for a time, an artificial splash pool had to be installed to provide a summertime water activity for children. Property values plummeted by as much as 50 percent and, according to Bosch, the $10 million spent to clean the lake has “hardly made a dent.”
So residents become understandably nervous when, as happened recently at Center Lake in Warsaw, they see startling changes in their lakes. Warmer temperatures after Christmas caused an ice melt on the lake, creating ideal circumstances for a red algae bloom, which covered the lake in a pink foam. The Center for Lakes and Streams was called by the Kosciusko County Emergency Management Department to test the substance, identified as planktothrix, a variant of blue-green algae capable of creating toxins; however, the lake was not in use due to the time of year.