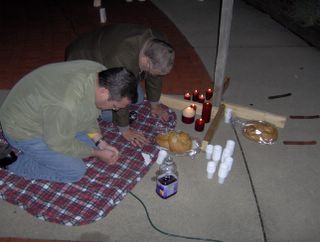 Communion while kneeling at the foot of the cross was one of the last stops in an outdoor “progressive Brethren communion service” at the Central Focus Retreat held in Angola, Indiana, on Monday, Tuesday, and Wednesday.

The communion service, which was organized and conducted by the staff of Grace Community Church in Goshen, Indiana (Jim Brown, pastor), began with a night-time open-air footwashing service on the shores of Lake James. The outdoor service was lit by hundreds of luminaries, and concluded with a challenging message on the four main things Christian leaders need to keep high on their priority list.

The retreat concluded about 10:30 this morning with a wrapup discussion on lessons learned from Psalm 119 and a prayer time, led by this year’s FGBC moderator Keith Shearer.

The next Focus Retreat will be the East retreat, to be held at Sandy Cove Conference Center on the Chesapeake Bay in Maryland Monday through Wednesday of next week–October 24-26.

More information is available from the website of Fellowship Coordinator Tom Avey by clicking here.