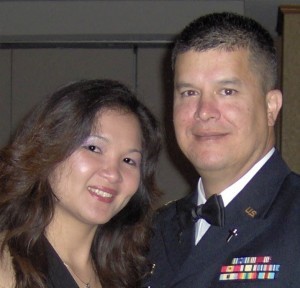 From the Eagle Commission Newsletter:

Army Chaplain John Arnoldbik serves as a Battalion Chaplain at Fort Huachuca, Ariz., the U.S. Army Intelligence Center and the U.S. Army Network Enterprise Technology Command (NETCOM)/9th Army Signal Command, located in Cochise County, in southeast Arizona, about 15 miles north of the border with Mexico. He sent a set of pictures from a recent prayer breakfast for soldiers, and this update of his ministry at Fort Huachuca: “Our battalion trains Warrant Officers, LTs, CPTs, and reserve CPTs. Currently I am the only chaplain there because the ethics instructor has been out due to several back surgeries. I also help with ministering to Advanced Individual Training Privates. We train thousands of students every year. We also train several hundred international officers from the Middle East, Asia, Eastern Europe, Central, and South America. I will be preaching a sermon this Sunday for the Advanced Individual Training Privates at 0930 called “Rock Solid Promises.” I also preach in the Main Post Chapel on occasion. I have a Bible Study every Wednesday at 1200 in the Battalion Conference Room. I need prayer to come up with creative ideas on how to minister to Soldiers. I also need prayer for God to open doors of opportunity to minister to those in need. Thank you!”