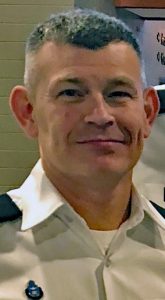 Charis Fellowship Chaplain, Major Billy Graham, has been selected for promotion in 2019 to Lieutenant Colonel.

Army Chaplain (Major) Billy Graham has been selected for promotion to Lieutenant Colonel, according to the promotion list recently released by the U.S. Army. Billy, with his wife, Robin, has served the Charis Fellowship as a military chaplain for nearly 15 years, according to Mark Penfold, DMin., Endorser, Chaplaincy Ministries, Chaplain (Colonel), U.S. Army Ret.

He’s had multiple tours in Iraq and Afghanistan and currently works for the Office of the Chief of Chaplains. He will pin on his new rank in the fiscal year 2019. Congratulations from the Eagle Commission to the Grahams as they continue to serve the Lord and our Fellowship so well!
Social Share
One Comment