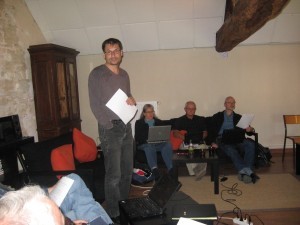 Florent Varak (standing) of France moderated the session this Wednesday in which delegates from Grace Brethren fellowships worldwide endorsed a document outlining implementation next steps for the CHARIS movement.

Wednesday was a “pivot” day in the meetings of the CHARIS leadership at the Chateau St. Albain in France as a document better defining the next steps for CHARIS was adopted.

The worldwide leaders of Grace Brethren fellowships met in August of 2008 at Bad Homburg, Germany, and crafted the original document entitled “Commitment to Common Mission.” That document revealed the intention of Grace Brethren worldwide to progress over the decade of 2010 in the three areas of evangelism and church planting, leadership development, and integrated or holistic ministries.

Since 2008 the document has been processed and endorsed by leadership and organizations representing all 35 countries where Grace Brethren churches or Points of Light exist, and this week’s meeting is for the purpose of deciding next steps and being more intentional about plans for implementation.

Essentially, the document lays out strategies under three main headings—toward an implementation of the Commitment to Common Mission document, toward an expansion of the vision for CHARIS, and toward a commitment of common identity for Grace Brethren worldwide.

Proposed implementation strategies include forming teams containing expertise in the three areas, to coordinate cross-culture to encourage and resource further activity in the three areas. Leadership has committed to communicating regularly and encouraging each other toward implementation, with a possible next gathering or global fellowship encounter in 2015.

And finally, there is an emerging sense that a better system is needed for the recognition and welcoming of groups of churches who may wish to become Grace Brethren, but have not been initiated by Grace Brethren International Missions. Therefore, without desiring to create more structure and another organization, CHARIS leadership has agreed on a plan that engages proximate fellowships to discuss with potential new fellowship members their commitment to biblical truth, biblical relationships, and biblical mission.

The Brethren Missionary Herald Co. has committed to assisting with the worldwide communication needs of CHARIS, and will be continuing to transmit information, build relational bridges, and facilitate exchanges and communications between participating fellowships and their representatives.

To reach the conclusion and finalization of the document approved today, Jorge Nunez of Argentina drafted a number of initial suggestions and Florent Varak of France moderated the meeting and discussion in which the agreement was achieved.