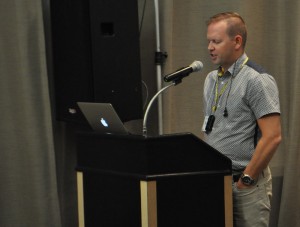 Bartley Sawatsky, executive director of the Fellowship of Grace Brethren Churches and pastor of Grace Community Church, Missasauga, Ontario, closed the session in which the Commitment to Common Identity was ratified, with a dedicatory prayer.

As the name of each country was called in the chronological order in which our movement entered it, delegates gathered in Bangkok stood and responded to the question, “How do you vote?” One by one, they said, ‘si!’, ‘oui!’ and ‘yes!’ By unanimous vote, they approved the Commitment of Common Identity as the fresh expression of the core beliefs and values of our global movement.

After extended applause, Dr. Dave Guiles, the coordinator of the Charis Steering Committee, read the following:

In 1883, at the first conference of The Brethren Church, our spiritual forefathers discussed a proposal to adopt a series of statements about our identity. Because of their fear of written statements, they rejected those proposals and instead declared the New Testament as our only creed.

By 1892, while they reaffirmed that only the Bible could be considered our creed, they proceeded to adopt a series of written statements to help them explain what made their movement unique from other evangelical churches.

By 1921, in the midst of growing concern about the influences of liberalism both within and outside of our churches, our forefathers created The Message of the Brethren Ministry. For several decades it would serve to evaluate the theological positions of those who wanted to become pastors. Later it would be adopted by all the churches.

By 1969, in an effort clearly designed to demonstrate what made us different from similar evangelical groups, the churches of the United States adopted our current Statement of Faith. With little modification, this Statement was translated and employed in our efforts to begin churches around the world. It has served us well for many years.

But it never was the desire of our forefathers that the Statement of Faith would remain a static document. With this in mind, in 1983 we added the following phrase as a preamble:

The Statement of Faith is the current expression of a never ending effort
to clarify an understanding of the primary doctrines we accept.

With those words, future generations were guaranteed permission for the work that brought us to this historic moment. And, in contrast to four previous efforts to summarize our doctrines, the Charis Commitment to Common Identity is truly the product of our global movement.

On this historic day, November 4, 2015, the thirty delegates representing Grace Brethren Churches in nineteen countries have voted unanimously to endorse a document that took three long years to complete. The Charis Commitment to Common Identity represents the most inclusive mobilization of global leaders in the 300-year history of our movement. And it ushers in a new day of global cooperation among those who trace our ancestry back to the courageous actions of Alexander Mack and his fellow believers.

We must stress that our work is not complete. Next week we begin the work of explaining our actions to the churches we represent. Then we must invite them to endorse our Commitment to Common Identity. Lord willing, the unanimity we have experienced today will echo throughout the Grace Brethren world. Let us pray daily toward that goal!

Second, today we must commit ourselves to the ongoing improvement of the CCCI. Before God and the world, we freely admit this is not a perfect document. In fact, no human document will ever be perfect, no matter how many people or how many hours are invested in it. So let’s mark our calendars. Lord willing, in 2020 some of us will meet again, in a location yet-to-be-determined, to create the next summary of our beliefs and practices.

But though the Commitment to Common Identity is not perfect, we declare that it is good enough. And for now, we rejoice!

So we conclude this historic moment with the words of the Apostle Paul, who exhorts us still today:

Now to him who is able to strengthen you according to my gospel and the preaching of Jesus Christ, according to the revelation of the mystery that was kept secret for long ages but has now been disclosed and through the prophetic writings has been made known to all nations, according to the command of the eternal God, to bring about the obedience of faith— to the only wise God be glory forevermore through Jesus Christ! Amen. Romans 16:25-27.

In honor of the role of that North American has fulfilled in the spread of our movement around the world, Rev. Bartley Sawatski, executive director for the Fellowship of Grace Brethren Churches, was invited to close the session with a prayer of dedication.