Mark Penfold, DMin., Chaplain (Colonel) U.S. Army, Retired, the Endorsing Agent for the Charis Fellowship has sent an update to supporters of the Eagle Commission. A portion of it appears below. Click here to read the complete newsletter.

One of my favorite times of the year as a chaplain was always around Passion Week.  Just like in many of our churches, military chapels for Christians design many of their services around the great events of our Christian faith.  My first exposure to the tradition was in 1994 as a Reserve Chaplain doing my 2 weeks of annual training at Fort Benning, GA with basic trainees.  On Friday, the chaplains led a 2-mile run for trainees and then handed out nails to each one as a reminder of when Jesus was nailed to the cross.  On Sunday, a big outdoor service was held attended by almost 2,000 trainees.

One of my last Easter services as a chaplain was at Fort Jackson, SC.  Over 2,500 trainees marched in the fog to the outdoor service.  As the service began, the fog lifted as we joined our voices in worship of the Risen Savior!

Our chaplains proclaim the Good News of a Risen Savior to all our military members and their families. We should never take lightly the religious freedoms we still enjoy and the open door to proclaim Jesus to our nation’s warriors. He is “the Resurrection and the Life!” 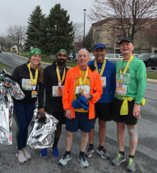 Chaplain Jack Galle (in photo at right) reports a busy schedule in caring for Veterans at the Lebanon VA Hospital in Lebanon, PA.  Many of you know that Jack was diagnosed and treated two years ago for pancreatic cancer.  Since then, Jack has completed several half-marathons (Jack is in the orange jacket) and rejoices in answered prayer for the good outcome of his treatments.   Continue to pray for Jack and Judy as he ministers to our veterans and the staff at the VA Hospital.

Chaplain Mike Jones reports of great ministry at the Long Beach VA Center.  The VA Center recently hosted a special event to honor Vietnam Veterans for their service and sacrifice.  Pray for Mike as he has opportunities to share the Good News of salvation and peace with many physically, psychologically and spiritually hurting veterans and their families each day.

We’re glad to report that Army Chaplain Cameron Michael is progressing well from the severe injury he incurred in May 2018 during a training jump.  Chaplain Michael suffered a broken femur when another paratrooper drifted under him, causing his parachute to malfunction so that he landed from an unsafe height.  He had several surgeries and has been doing physical therapy.  We praise the Lord for the good news that he recently received after a Medical Review Board deemed him fit to continue his service.  Pray for continued improvement and strength as he ministers at Fort Bragg, NC.

Other News of Chaplains

Army Reserve Chaplain Jeremy Pfeister (left) was recently promoted to Captain. Jeremy graduated the Chaplain Officer Basic Leaders Course in summer 2018. Jeremy is serving in the 77th Sustainment Brigade and is scheduled to deploy soon. Pray for him, his family and his unit.

Murray Family Update…  Jim returned to class and will graduate from the Chaplain Captain career Course in early June. Ashley reports continued growth and health for Ethan. He’s now pushing over 12 lbs.  Brother Drew continues to need medical care. Pray for the Murray’s as they balance school and caring for the medical needs of their children. The good news is that Jim’s follow on assignment after his course will be at Fort Jackson where he will be ministering to new trainees. By staying at Fort Jackson, the Murray’s will be able to maintain the medical care teams they have and also be close to family and their home church in Aiken, SC.