Charles Ashman: ‘Stir the Sugar in the Bottom of the Cup’ 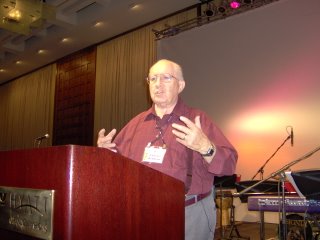 Pastor Charles Ashman, who retired from his last pastorate in 1989, addressed the first session of the Celebrate06 conference this morning with an address entitled “Coals Aglow.”

Speaking from 2 Timothy 1:1-7, Ashman, 82, began by saying “I promised the Lord I would serve Him as long as He gives me breath.” Then he went on to give a powerful and convicting biblical message on the importance of Christians using their gifts and exercising unity in the body of Christ.

Citing an illustration of a man in a restaurant who used all the available sugar in his coffee and asked for more and was told by the waitress, “Stir up what you’ve already got,” Ashman skillfully made the biblical point that people in our churches should “stir up the gifts that are within them” and get busy in ministry.