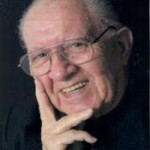 His first pastorate was in Rittman, Ohio, (First Brethren Church) and it was in Rittman that their children were born. The family moved to Phoenix, Arizona, in 1955, where Charles served the Grace Brethren church there.

In 1962, Charles became pastor of the Winona Lake Grace Brethren Church. In 1969 he was asked to teach part-time at Grace College and Seminary as well. He taught mostly seminary courses in the Pastoral Theology field, English Bible, and Beginning Greek. Students appreciated his insight and experience. One alumnus comments: “Pastor Ashman was very knowledgeable and taught in such a practical way…to this day, I still use and remember many things he taught us in my current leadership roles in our church.”

Charles was a resident of Kosciusko County, Indiana, for the past 50 years, where he remained a member of Winona Lake Grace Brethren Church that he pastored, and was a past member Warsaw Kiwanis Club. He also served the Fellowship of Grace Brethren Churches as conference coordinator and as an assistant to the current Fellowship Coordinator, Tom Avey. He recently completed board service on, and was honored by, Integrated Community Development International (ICDI).

There will be private visitation and graveside services, with burial at Oakwood Cemetery of Warsaw, Indiana. Arrangements were entrusted with Redpath-Fruth Funeral Home, 225 Argonne Road, Warsaw, Indiana.

Memorial donations may be directed to Integrated Community Development International, PO Box 247, Winona Lake, Indiana 46590 and would be appreciated by his family.