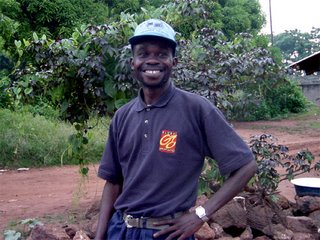 The first and second grade Sunday School classes from the Winona Lake (IN) Grace Brethren Church, under the leadership of Pam Carroll and other teachers, recently raised $300 to buy a bicycle for an African in ministry.

As a result, Appolinaire (pictured), the Project Hope & Charite school teacher who oversees two literacy schools for the Grace Brethren in the Central African Republic, will have a new bicycle to use in extending his ministry.

This past Sunday, June 18, Ted Rondeau of the Grace Brethren International Missions staff presented the class with tokens of appreciation that included framed photos and text which will hang on the children’s classroom wall.

According to GBIM missionary Barb Wooler, Appolinaire was trained back in 1993, and has faithfully used his skills to train other literacy workers and teach many Central Africans to read.

Appolinaire is married with four daughters and attends a Grace Brethren church in Bangui, CAR.