Pastor Chip Heim of the East Side Grace Brethren Church in Columbus, Ohio, is currently in the Ukraine, ministering in a Bible college there. 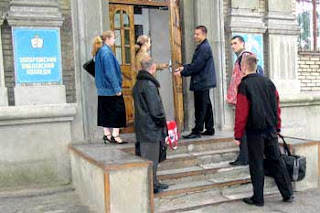 At least once a year, Pastor Chip travels to the Ukraine to teach at the Zaporozhye Bible College (pictured). While there, he sends e-mail updates on incidents that make a particular impact on him or on those to whom he ministers. Here is one of his most recent communcations home:

When I come to Ukraine I always hear great stories. But this story goes beyond being a great story and into the realm of being sacred. Here’s the story…. I took the interpreters out for dinner last night (thank you for the funds to do that!).

They work very hard, are there at our beck-and-call as foreigners, and their pay is meager. So every year I treat them to a meal at a nice restaurant. I tell them to order anything they want. As we waited for our food I asked them to tell me a story about God’s work in their lives.

Nadia, who has interpreted for me for years (although not this year), went first. She told me about a girl whom I will call Sveta. Two interpreters from the college worked at a children’s summer church camp last summer. They came back and told Nadia about a girl from the camp named Sveta.

She is nine years old, a girl in terms of her internal organs but externally she looked like a 16 year old boy (I have a picture) – developed arms, a boy’s chest, hair on her body, and a deep voice (deeper than mine according to Nadia).

Sveta is very shy, understandably so, and she rarely talks, so that people will not hear her deep voice. Her body needed cosmetic surgery in the genital area and it needed hormone treatments to make her appear and sound less like a male. Sveta lives in small village (it only has two streets) 350 miles from Zaporozhye. Her parents are alcoholics and do not give her any parental care. They had done nothing about her condition.

Nadia was overcome with love for this girl whom she had never met and she felt compelled by God to try to help her. As Nadia continued her story, she mentioned that when Americans come to Ukraine and say, “We have such love for you”, Nadia would dismiss such comments, thinking “How can you love us when you don’t know us?” But here she felt love for Sveta, even though she did not know her.

Nadia knew Sveta needed surgery and medicine but Nadia has no money. She did not know what she could do, but she believed God wanted her to do something. So, Nadia traveled the 350 miles to Sveta’s village and went to her house to see how God might work. Nadia told Sveta’s parents that God had led her to their house to help Sveta.

Nadia returned to Zaporozhye and began contacting hospitals in Kiev (about 500 miles north of Zaporozhye). She found a hospital and doctor that would do the surgery for free, and that would provide the hormone treatments at a very low cost. Sveta traveled to Kiev and had the surgery.

After the surgery, Nadia returned to Sveta’s village and visited with the family again. She met Sveta’s grandmother who wanted to know about the God who would send a stranger 350 miles to help a nine-year-old girl she did not know. Nadia told the grandmother about Christ and she repented and is now in church. Sveta is doing well and the treatments are beginning to work.

At the end of the story Nadia said, “The thing I learned the most from this is how critical it is to be completely dependent on the Lord at all times so you are prepared to serve him at any moment.”

I can add nothing to that story.