Church in the Fast Lane 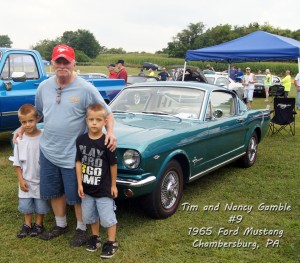 The weekend of September 12, it rained in Chambersburg, Pa. Last year, around the same time, it drizzled. But neither a drizzle nor a dumping of rain was able to dissuade the congregation of Grace Brethren Church from hosting their annual Grace Community Car Show.

A total of 93 cars and motorcycles, of every year, make, and model, dotted the church’s landscape this year for the third annual car show. Families flocked between the displays, while judges gauged each entry. And in between, there was the opportunity for kids to get their faces painted, sail around in a bounce house, and listen to the gospel story from inside a tent… possibly for the first time!

The funds raised from the event are being put toward the construction of a new children’s playground, which the church was able to begin earlier this year. The idea for this unique ministry came in 2012 when Pastor John Bayer was shown a car trophy by one of his church members. It got him thinking about his own childhood and helping his father out in his auto body shop. Both of Bayer’s parents, having since passed away, loved God and loved reaching out to the community; especially through children’s ministry.

“As I began to think about doing something in memory of my parents,” Bayer deduced that day. “It began to make sense to begin the planning process to launch a community car show that would benefit the children of out community.”

He had the support of his church with this idea from the start. Many of the congregation work and volunteer in the numerous weekly children’s programs, such as the Released Time Bible Program or Child Evangelism Fellowship’s School Good News Club. It made perfect sense to them to hold a children’s benefit event. There was no shortage of hands when it came to the food, the judging, or the games… even the dunk tank!

Bayer has been thrilled with the show’s increasing turn-out, as well as the doors of conversation that God has been opening. Since the groundbreaking car show in 2013, three new families have joined Grace Brethren Church. The church is able to engage with the unchurched in their community, whether by business or a love of axle grease and tire rubber. Making the presence of God more alive and accessible to his community is all Bayer- and his parents- could ask for. –– by Haley Bradfield

Click here to see images from the 2015 car show.