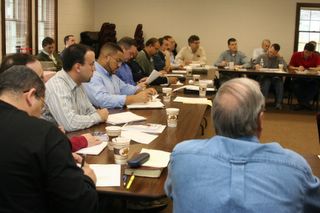 Dr. Terry Hofecker, senior pastor of Northwest Chapel Grace Brethren Fellowship in Dublin, Ohio, and a Grace Theological Seminary faculty member, gives a brief update on the MI 700 class held in Columbus a couple of weeks ago to stimulate and facilitate church-planting in the Fellowship.

The course had participants from Alaska, Los Angeles, Miami, Connecticut, and Ohio.

Eighteen credit and audit students were present as well as one spouse observing. Two Grace Brethren North American Missions Regional Missionaries served as small-group facilitators. An executive from Dublin who heard about it on Sunday sat in on the class all week. That made an enrollment of 18, but an attendance of 22.

Three Hispanic pastors participated, whose countries of origin were Colombia, Cuba, and Mexico. At the last minute Martin Guerena held a Spanish-speaking small group for them and they gave great feedback for developing an Hispanic culture version of the course. There were two African-Americans from Washington D.C. in the group, as well.

According to Hofecker, feedback on the course was overwhelmingly positive. One evaluation form said, “The best class I have been to on church planting–and I have been to MANY over the past 20 years!”

Hofecker said, “We had a highly motivated group so we got a lot of ‘changed my life’ kind of feedback.” He has set up a database and plans to track those who plant churches as a research project to see if the training helps them outperform the averages.

“That is the final real world test, after all,” he said. GBNAM’s Ron Boehm and Chuck Davis served as small-group facilitators, along with Clancy Cruise and Martin Guerena.

The course will be taught again August 14-18. Information is available from Grace Brethren North American Missions or from Grace Theological Seminary.