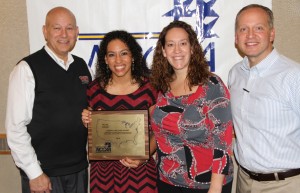 The Hellings Award is the highest individual honor handed out to volleyball student-athletes by the NCCAA, recognizing one individual each year for outstanding Christian character, athletic and academic achievement and community service.

Clemmons has been a four-year starter for Grace. She has helped the Lady Lancers to three national championships in her four seasons – the first time that feat has been accomplished in program history.

The senior from Muncie, Ind., enters the 2014 NCCAA National Championships with a team-leading 660 digs. Her 1,889 career digs ranks third all-time for Grace.

“Teams will follow great leadership, and we had that this year with Hannah. Coaches can give and speak leadership qualities all the time, but Hannah’s selfless, generous, humble and loving leadership allowed our team to develop and grow tremendously this year,” said Grace head coach Andria Harshman. “Hannah is the full package. She has grown over the past four years in her faith and is ready to attack the world for Christ. She is very deserving of this award.”

Clemmons will graduate in four years with an MBA and a Bachelor’s degree in Sport Marketing, maintaining a career GPA of 3.90. At Grace she was a student representative for the Measure of Grace initiative revealed by the college and was also the chairperson for the Executive Forum for the School of Business for three years.