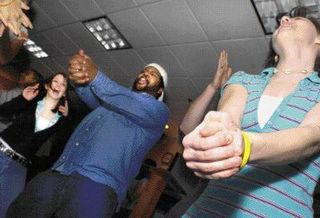 Cindy Harrison didn’t grow up in a Christian household and there have been times when she’s been torn about her faith, she said. However, on Wednesday nights for the past two years, she drives from Cheltenham to attend Grace Brethren Church’s youth group meetings in Clinton.

It may be a trek for the 17-year-old Gwynn Park High School student, but a worthwhile trek nonetheless.

As one of 200 youth who choose to gather at Grace Brethren each week, Cindy is not the only one who has found a niche in a group whose turnout may seem significant in a time when so many young people are prone to focus their attention on things like video games, television or in some cases, gang activity and violence.

During the meetings, time is used for Bible study, singing, playing games, planning the other activities and events they hold throughout the year, and sometimes to discuss issues like peer pressure or future aspirations.

A meeting on March 1 showed energy levels were high. Cindy, along with dozens of other teenagers, congregated in the church’s multi-purpose room, sitting at tables talking or sipping drinks from the makeshift beverage bar.

Others took turns on stage rehearsing the drama skits and musical acts they were to perform at the “Nurturing Abilities for Christ” rally that weekend, the rumble of the room occasionally intercepted by a break for prayer.

Sitting in the corner of the room, her voice no competition against the booming sounds of an onstage act, Cindy said it’s the warmth and acceptance she’s received from others in the group that keep her coming back each week. Warmth and acceptance without any pressure, that is.

“There are some people who will come up to you [introduce themselves] and say ‘Hi, Jesus loves you.’ These people never did that. They showed me a way and let me find [my faith] myself,” she said.

For Tiffany Dukes, 16, a student at Grace Brethren’s High School, the group has helped her open up, both spiritually, mentally and aided in her growth as a leader. When she was in the sixth grade, Dukes said he parents divorced, causing her to become a timid and reserved. Since joining Grace Brethren’s youth group she’s been a school officer every year and is looking to run for student body president. “It’s really just been amazing how people keep encouraging me to keep trying and cheerleading me,” she said.

Sixteen-year-old Stephen Wayne of Clinton has visited other youth groups in the area but keeps coming back to Grace Brethren. “It’s an opportunity to [ride] with people of the same faith who basically share my values,” he said. “This is one youth group where there’s not any bigotry or racism.”

And besides that, it’s fun, they all say.

For youth pastor Koreem Mack, the group offers children companionship, love, acceptance and an outlet for expression, something they may not have in other parts of their lives.

“I think we’re pretty real here. I think we do talk about being shallow … we’re not holier than thou and we deal with it and we move on,” he said. That approach coupled with the use of music and other mediums that appeal to today’s youth is what makes the group so successful, he said.

He also stressed that there is a place for everyone.

“I don’t try and push a Bible down their throats. That’s not how I build a relationship with people,” said Mack. “Even if [they] don’t like the Bible, I will still try to help them.”

Children from pre-school to high school and beyond attend the meetings each week. About 75 percent of them are students or church members at Grace Brethren and 25 percent of them come from elsewhere, according to some of the pastors.

According to Mack, about six years ago enrollment was at 70, which then dropped to 30 until the format was readapted to include more updated materials that appealed to youth. Now at 200, enrollment is the highest it’s ever been.

“I get the feeling teens, they don’t want to admit it, but they want some structure,” said Bob Trefry, an associate pastor who oversees “Awana,” the portion of the youth group that is for younger children. “It’s promoting an atmosphere that’s constructive, that’s loving and they can count on us.”