Coast to Coast for Hand in Hand 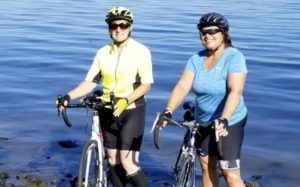 If you saw Barb Wooler in the coffee aisle at Walmart, you probably wouldn’t think “cross-country cyclist.” A short, friendly woman with cropped sandy-blonde hair and lively blue eyes, Barb doesn’t draw attention to herself. But this summer, she biked coast to coast across the United States.

Barb and her longtime friend Judi frequently took long bike rides through the rolling countryside of Pennsylvania, Ohio, and Indiana, central to where they both live. But cycling across the entire nation was something they had only dreamed of doing.

“In February I went to Judi’s house, and I noticed her list of New Year’s resolutions posted on her cabinet,” Barb says. “One of them was to start the first portion of the Ride Across America challenge. And I thought, ‘That stinker, she’s going to start without me!’”

Although Barb didn’t say anything then, she couldn’t stop thinking about it. Whirring spokes, tires on gravel, the breeze on her face—her eagerness to conquer the challenge—filled her imagination. Finally she called Judi, and they concluded, “Let’s just say we’re going to do this, and then figure out the problems.”

One “problem” was that Barb had responsibilities she couldn’t ignore. She had just assumed leadership of Hand in Hand Schools in the Central African Republic (CAR). This organization partners with local CAR churches to provide education and care for orphaned kids. Barb had started the organization in 2006 and served as its director until 2013.

But now that the ministry’s director was retiring and no one had come forward to take her place, Barb was resuming leadership in order to continue providing care for the 40 schools, 40 teachers, and 1,800 kids it now encompassed.

“People in the CAR thought the program was going away because its director was retiring and nobody was stepping up to take the position, so I finally did,” Barb says. “But I still felt like I needed to help people on both sides of the ocean understand that this program has a future. That it’s healthy. That it’s going strong.”

As Barb prepared for the challenge and managed Hand in Hand from her home in Indiana, these thoughts weighed on her, tangling in her mind. She knew she couldn’t do the full ride and keep up with her responsibilities. She and Judi had decided to complete the portion from Washington State to Indiana and not continue to the ride’s end in New Jersey. But even though they had settled on this solution, Barb wasn’t satisfied. Not finishing felt wrong.

“And then one day, those two ideas collided,” she says. “Hand in Hand and Ride Across America.” People normally did big challenges like long bike rides or runs for a cause, she reasoned. Why not ride coast to coast to raise awareness for Hand in Hand Schools?

After receiving approval from Encompass leadership for this venture, Barb set to work on the logistics. Since she was riding for Hand in Hand, she could complete the entire challenge, bringing people along virtually and using the ride as a platform to promote the ministry. Now there was even more preparation to be done.

Barb named her campaign Coast to Coast for Hand in Hand and created daily emails for a 40-day prayer challenge so that people could virtually accompany her and Judi as they traversed the United States. In each update, she featured a different Hand in Hand school and teacher, acquainting people with the ministry and putting faces and families to the organization. She also set up social media accounts and an online ride journal where she posted pictures, videos, stories, and a changing map so that people could participate vicariously on her journey.

The response was greater than she anticipated. Almost 300 people signed up to follow along on her ride and participate in the prayer challenge, viewing America’s beautiful mountains, rivers, trees, and plains through Barb’s daily videos and pictures, and hearing the laughs she and Judi shared through the setbacks, late night campouts, and pit stops along the way. Over 300 people attended their pop-up Hand in Hand celebrations, where they shared about the ministry and its needs.

“In the months of June, July, and August, we raised $110,000,” Barb shares. Although some of this money would have come in anyway, many new donors were added during the ride’s timeframe. Testimonials came pouring in—some people hadn’t realized how big the organization was, others were blessed by the personal aspect of the pictures of each of the teachers and their schools, and still others met up with Barb and Judi to ride portions of the challenge with them.

By the grace of God, Barb and Judi completed the entire journey—from dipping her back tire in the salty waves of the Pacific coast of Washington State to running her bike into the chilly, choppy Atlantic sea that lapped against Belmar, New Jersey. And by the grace of God, Barb showed how robust Hand in Hand Schools are—and how tenacious its director is.

Barb doesn’t know what the future holds for Hand in Hand Schools, but she sees growth, and now because of this ride, increased support. Her prayer is that the nearly 2,000 kids currently in the program will trust in Jesus as their Savior and find the joy of new life in Him. – from encompassworldpartners.org