Colbert’s Unexpected College Journey: ‘By God’s Grace, I Ended Up at Grace’ 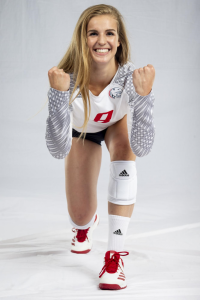 Have you ever looked in the mirror and not recognized the face staring back at you? Have you ever gone so far down a path that you start to lose who you really are? It’s in those moments of dissonance that we have to make a choice. Who am I? And what am I about?  For Cassadi Colbert, this choice came in the midst of her college journey after landing an opportunity of her dreams.

But was it worth it if it meant losing what mattered most?

Volleyball on the Mind

From her early high school days, Colbert knew she wanted her college journey to include playing volleyball. She was a self-proclaimed “gym rat” in high school, always training to be the best she could be.

At the start of her sophomore year, she started reaching out to college coaches in the south. One of her volleyball teammates had already signed at the University of West Alabama, and at practice one day Colbert made a passing comment, “Wouldn’t it be so cool if we could play college together?”

Within three weeks, her teammate had reached out to her college coach. It turned out she was looking for a scrappy, utilitarian player. A player like Colbert. After a few visits, the coach asked Colbert if she could graduate high school a semester early to start training with the team.

Colbert had no hesitations, “Absolutely.”

The Chance of a Lifetime

She was offering Colbert a four-year, full-ride scholarship to come play for her.

“I knew right away that I wanted to go,” said Colbert. (As a 5’8” hitter, she knew that this was a once-in-a-lifetime opportunity, as most Division 1 hitters are at least 6 feet tall.) “I told her, ‘If we can get me into the program in time, I want to play for you.’”

Two weeks later, Colbert arrived at the University of South Alabama for her first day of class having never stepped foot on the campus, knowing very little about the school, and not recognizing a single face on campus.

Colbert’s college journey had been anything but traditional. All she knew for certain was that she wanted to play Division 1 volleyball.

The coaching staff at the university brought Colbert in as a “culture changer.” A hard-working player with strong values and a tenacious spirit, Colbert embodied exactly what they wanted their program to be about. In fact, Colbert’s face was plastered on the main wall of the volleyball office. She was, quite literally, the face of the program. Even though she was still technically a senior in high school by age, the coaches had high expectations for her.

“I was the drill sergeant who had to keep everyone in line,” Colbert recalled. “I knew it was going to be a challenge because the morals and values of my teammates were far different from mine,  and I couldn’t micromanage their social lives.”

That spring semester proved to be very challenging for Colbert in several ways.

“I had never even scratched the surface of the physicality of that level of play,” she said. “And moving more than 650 miles away from home was difficult. I kept telling myself that God had a plan. I knew that He had sent me there for some reason.”

“I knew I was developing as a person, but not in a way that was fruitful in my walk with God,” confessed Colbert. “I was hyper-focused on volleyball and I lost sight of balance in life. I was not a joyous person. I could not think straight, and if I missed a workout, I was totally rattled.”

She wasn’t eating. She wasn’t sleeping. She didn’t even want to see her family. Her life was so consumed with volleyball, she did not have the time, energy, or desire for anything else.

“I physically, mentally, and emotionally went through some of the hardest things during that season,” recalled Colbert. “I was in a wrestling match with myself. Was it all worth it? I had worked so hard to be there, and it was everything that I wanted on paper. I kept asking myself: Am I being a wimp if I quit? Am I letting people down?”

Colbert went home for Christmas break and cried every single day. She absolutely dreaded going back to school. Somehow, she mustered up the strength to return, but at the very first team meeting, Colbert reached her breaking point. The cycle she had experienced in the fall was never going to end. She knew that she had to be done.

“It was a lot to walk away from, and it took me getting to the bottom of the bottom, and being broken spiritually, emotionally, and physically. I was literally at my wit’s end. To me, everything was just falling apart.” 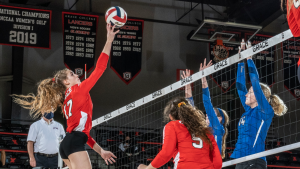 Colbert searched for a new university in January of 2020. During that time, she called Makaela Lochmueller, a former club teammate who was playing at Grace. She asked if they were looking for an outside hitter. Immediately, Lochmueller said, “Call my coach. Come on a visit.”

On the visit, Colbert sat down with Coach Katie, shared about her college journey and her struggles, and expressed what she was looking for in a school. She wanted a volleyball program that goes hard in the gym, but also fosters genuine friendships off the court. She was looking for a school that values every single aspect of life, from athletics to academics to faith.

“Coach Katie understood,” said Colbert. “She assured me, ‘At Grace, you can walk into the gym knowing that you can breathe easy and that everything is going to be okay.’”

“Breathe easy.” These words were revolutionary for Colbert. After months of ceaseless striving and never-ending pressure, breathing easy seemed like a pipe dream, something that would always be outside of her reality.

“By God’s grace, I ended up at Grace,” says Colbert.

She transferred in the fall of 2020 and has loved every moment since. Today, she is able to look back and know that God was totally in her college journey. She didn’t end up here by accident; she is here for a reason. And every single day, she learns more and more about what that reason is.

For one, she’s had a renewed vision for her career. She switched her major from criminal justice to communication and plans to get an MBA through the bachelor’s and master’s dual degree program. She hopes to become a funeral home director, a career path inspired by her early experience of losing her older sister and her closest grandmother within a matter of years.

“I want to be there for other people the way others were there for me and my family during those hard times,” she said.

And most recently, her return to Kosciusko County has brought her a broadened platform. This summer, Colbert was named Miss Kosciusko County Fair Queen. She will go on to compete in the state fair queen pageant this winter.

Ask Colbert about her college journey, and you can’t help but notice that she shares it from a deep well of peace. Through all of the ups and downs — through the uncertainty and the times that didn’t make sense — she trusted God had a divine purpose.

She knew that He who brought her to it would bring her through it.

“Being confident of this, that he who began a good work in you will carry it on to completion until the day of Christ Jesus.” -Philippians 1:6