Cold Case Detective: Verifying the Truths of the Bible

A cold case detective who used his investigative skills to verify the truths of the Bible, encouraged the Momentum audience Thursday night to use similar methods to know what they believe.

Noting that that cops see the world divided between two worlds – sheep and wolves, J. Warner Wallace said, “Sheep are dumb animals. They don’t even know they are hunted by wolves.”

“There is a third animal in the yard,” he added, “a sheep dog that stands between the sheep and the wolves,” he said, noting that many first responders (police, firemen, EMT, etc.) are sheep dogs.

“It’s time for you to stop being sheep,” he stressed. “The culture is full of wolves. They don’t believe what you believe, or what Jesus taught.”

“If the yard was full of sheepdogs, we wouldn’t have a wolf problem,” he said.

His comments came at the end of the main session where he methodically proved that Jesus lived and died. Using the skills he had honed as a detective, he examined all the evidence, coming to the conclusion that the story is true.

It was the same method he used at age 35 when, as a professed atheist, he first believed the truths of the Bible.

“You’d better know why this is true,” he stressed. “Make a decision tonight, this week,” he added. “You have a chance to be a sheepdog and be able to defend it to your professors and to the world around you.”

As Wallace finished speaking, Jeff Bogue came to the stage and encouraged the audience to take out the Bibles and look at 1 Corinthians 15:1-22.

“Our theme of the day has been to study the Bible,” he said. “I want to love God with our minds.”

He had the audience take about ten minutes to process the passage quietly and respond to it.

“Pray through the passage and ask God to speak to you through the living word of God,” he said.

Earlier in the evening, Davey Blackburn, a pastor from Indianapolis, Ind., shared the story of how he came home for the gym 18 months ago and found his wife collapsed on their living room floor. She had been shot while their young son was in his crib upstairs and eventually died.

“I remember growing up and hearing people talk about tragic experiences, in that moment I couldn’t understand how God was in any of this,” he said.

“There was a seed planted in moments like this,” he stressed, referring to the Momentum conference. “God allowed it [his wife’s death) to happen for a reason.”

He said he began to study Psalm 23. “I wonder if sometimes God leads us into the valley, not because of something we’ve done wrong, but in preparation for something in the future,” he said.

He particularly focused on verse five, where a table is prepared in the presence of your enemies.

“He’s making me dangerous,” he said. “How dangerous of a dude to you have to be to sit down to down and dine with your enemies?”

“In the circumstances you are going through, the enemy means for evil,” he concluded. “God is going to turn it around.” 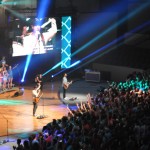 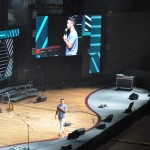 Davey Blackburn shared his story about finding his wife murdered and what God taught him through the situation. 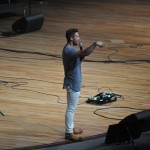 Davey Blackburn encouraged the students to “be dangerous” for God. 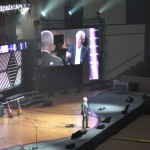 J. Warner Wallace is a cold case detective in Los Angeles, Calif., who used his investigative skills to examine the Bible. 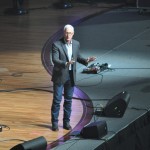 J. Warner Wallace encouraged students to know what they believe. 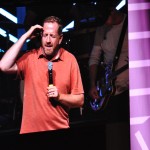 Jeff Bogue concludes the session by having students look at 1 Corinthians 15:1-22.