Grace College student, Asia Weimer, has written a children’s book about learning to accept others’ differences. Her appearance before students in Warsaw Community Schools was reported by the Warsaw, Ind., Times-Union. A portion of the story appears below. Click here to read the complete article. 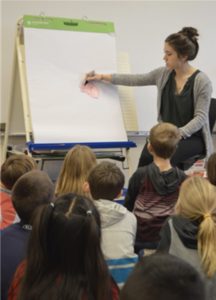 Asia Weimer’s book, “Apartment Friends,” started as an art project at Grace. Weimer wrote the 36-page book and did all the illustrations, then had it self-published.

“It’s a story about these two friends that meet and they don’t share a common language, so they have to problem-solve how they become friends even though they can’t communicate,” Weimer said. “It’s a sweet story about empathy, getting to know somebody.”

The characters come together by drawing pictures together. The languages the characters speak are left ambiguous so children who read it can apply it to their own circumstances.

The little boy in the book, Everest, is modeled after Weimer’s younger brother, who is growing up in Thailand with their parents. She said he’s having the same situations in real life as her characters do.

“He speaks English at home with my parents, but when he goes out he’s often playing with Thai children, and so they kind of just come up with their own ways of playing together without that common denominator of language, which is really cool,” Weimer explained.

“Kids, from what I’ve seen, are just naturals at this, and I think as adults we … have a harder time because we do most of our communications verbally. But maybe we can take some cues from them and learn from that. We shouldn’t necessarily just put up boundaries right away, knowing there’s a difference between two people, but overcoming that and finding common ground is super important,” she said.

A GoFundMe page generated more than enough money to have 100 copies printed in December. Only a couple are left.