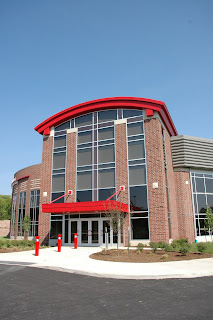 Grace College, Winona Lake, Ind., was one of several institutions featured in a story about colleges in northern Indiana that have used renewable energy or recyled materials in the construction of new buildings. The story appeared in this morning (Sunday’s) Fort Wayne (Ind.) Journal Gazette.

Not only was green technology incorporated in the construction of the new Orthopaedic Capital Center, the parking lot for the facility is constructed over a brownfield. The building, pictured at right, will be the site of Equip07, the national conference of the Fellowship of Grace Brethren Churches, from July 29 through August 3.

After about a year of construction, the $9.1 Center opened in May. The first event it hosted was graduation.

Filled to capacity, the roughly 56,000-square-foot building generated lots of praise, though many may not have been aware of the more environmentally friendly aspects of the building.

Tom Dunn, chief operations officer for Grace College, said he thinks most visitors to the center are aware of how the project helped to clean up the former brownfield.

The 4-acre site was used by a former owner as a dump for items such as brake linings that contained asbestos.
To read more, click here.
Social Share