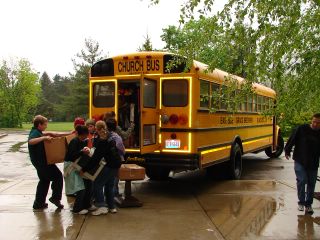 Lydia Thoman would have been a sixth grader at Grace Christian School, affiliated with the East Side Grace Brethren Church (Chip Heim, pastor) this year in Columbus, Ohio.

However, last summer her father accepted the pastorate at Central Baptist Mission Center in Akron, Ohio. Since Lydia could not be a student at GCS, her class decided to visit Lydia in Akron. Plans for the visit ended up becoming the Akron Missions Trip.

The students traveled to Akron on Friday, May 12 and spent most of the afternoon passing out flyers in the neighborhood for a free movie night at the Mission Center, complete with hot dogs and soft drinks.

As a result of the students’ efforts distributing flyers in the community, Friday night 55 people came to watch the movie Left Behind. Some of the people who came into the Mission Center had never set foot in there before last Friday night. Then, things became even more exciting, as after the movie 11 neighborhood children prayed to receive Christ as their personal Savior.

On Saturday, the students unloaded clothing, small furniture, computers, and household goods that they had collected at GCS for distribution to the people who lived near the Mission Center.

As the church doors opened, people began to come in, fill a 30-gallon bag with clothing or a large cardboard box with household items, and then leave and tell their friends about what was happening at the Mission Center. They could not believe that anything they wanted they could have at no cost.

The process continued throughout the afternoon, items were picked up, yet more items seemed to remain. Dana Richmond put it this way, “It was like Jesus and the fish and the bread. We kept passing out things, and they kept taking things, and yet it seemed there was still more left to distribute.”

When evening came, there was still clothing and household goods left, with these items being collected and donated to a homeless shelter in Akron.

Although the GCS students left on Saturday, the impact of their ministry continued to be felt the following day. The Sunday morning worship service at Central Baptist Mission Center found 14 local youths associated with gangs and drugs in church. Mrs. Thoman was familiar with many of them as troublemakers, but on Sunday she noted how calm and well-behaved they all were.

As for the 11 children who prayed to receive Christ on Friday night, they were in church along with their parents. Mrs. Richmond received a telephone call from the Thomans to express how much the mission trip had meant to their church. They said that the entire congregation was fired up as a result of seeing the GCS students reach out and minister to the neighborhood.