The Grace Brethren Church of Columbus (Worthington), Ohio, each year presents a Living Christmas Tree holiday special. This short article discusses some of the wildlife involved in the production. 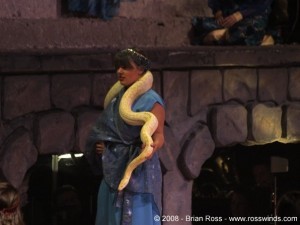 Ever wonder where all the animals that appear in the Living Christmas Trees pageant come from? Some are Ohio natives, like the sheep and goats. But the rest travel from Wisconsin each year to be a part of the show.

In time for dress rehearsals the week prior to the first performance, two camels, a snake, and a donkey arrive via their “tour bus”…an animal carrier from the Wisconsin Dells. Herbie, Clyde, Max, and Jack all enjoy a quiet trip to Ohio where they have become local celebrities.

Herbie and Clyde are teenage camels who’ve starred in the shows for the last five years. Other relatives played their roles before them. Prior to the trip here, they hang with friends and family at their exotic pet farm in Wisconsin giving camel rides to visitors.

Herbie and Clyde can be seen between LCT performances munching on vanilla wafers, waiting for their cue to come down stage and wow the audience. They’ve both been part of so many shows that they’re very comfortable around people.

Last year one of the camels caught a cold. This is unusual, but when he sneezed on the actor in front of him, the mess was something few will ever forget! And as you might imagine, there are other things to clean up behind the animals. Several very selfless volunteers care for this task each year.

Many don’t realize there’s a real snake in the show. Max is 45 pounds of pure, cold-blooded reptile hanging on shoulders of volunteer actress Rebekah Aulger. Though he sometimes tries to slither his way off, Rebekah just keeps adjusting him so he doesn’t escape. We’re all happy to know that Max’s mouth is taped to keep from accidentally biting anyone.

Our donkey doesn’t actually have a name, but he’s been nicknamed Jack for fairly obvious reasons. He isn’t exactly a fan of performing, and often decides he doesn’t want to carry “Mary” through the auditorium. His handlers always manage to coax him into doing it, and Jack gets rewarded with carrots for a job well done.

Don’t miss the cameo performances by these talented friends from the animal kingdom! Get your tickets for a Living Christmas Trees performance today! Visit www.GraceLCT.org, call 1-888-477-8573, or visit Grace Bookstore/Cafe.