Ken Lawson, a member of Grace Polaris, a Grace Brethren congregation on the north side of Columbus, Ohio (Mike Yoder, lead pastor), was quoted in Friday’s Columbus Dispatch. Ken, a Columbus police officer and the human trafficking liaison for the department, was featured in the July-August 2006 edition of FGBC World. Read the complete story here. 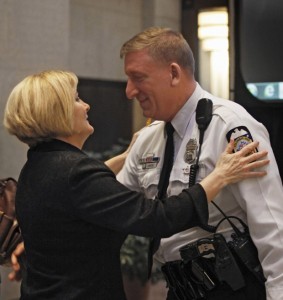 The victims are often as young 11 or 12 when they are “chosen” by pimps to become part of a dark nightmare of human trafficking.

Officer Ken Lawson, the human trafficking liaison for Columbus police, has pretty much seen it all in recent years but he still gets emotional when he talks about the youngest victims.

“The average age of a runaway is 12, usually a female,” Lawson said today at the Human Traffic Awareness Day session at the Ohio Statehouse. “How does a 12-year old girl stay away from home for any length of time? She has help, right? And then they want something in return for that help.”

Lawson said Ohio has made progress in public awareness by law enforcements, prosecutors and the general public from a few years ago when minor sex trafficking victims were usually treated as criminals.

A state commission estimated there are more than 1,000 children trafficked for sex in Ohio annually with 3,000 more at risk.