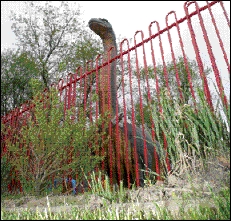 Bob Combs, pastor of the Norton (OH) Grace Brethren Church-South Campus and past moderator of the FGBC, is serving as advisor to a new creation science museum in the Akron area. (photo by Ken Crisafi)

COPLEY — Check your assumptions at the door: This isn’t your father’s dinosaur museum.

William Sanderson displays the jawbone of a Wooly Mammoth and the teeth of a pterodactyl, but at his soon-to-open Akron Fossils & Science Center located in Copley, a different kind of idea emerges.

The idea the Earth is fairly young after all.

According to Sanderson, his center is the only one of its kind in Ohio: a creation-based science museum that offers the opportunity for children and adults to challenge their assumptions about creation, evolution, dinosaurs, prehistory, nature and the world as we know it.

The center is devoted to teaching creation science and intelligent design models in contrast to evolutionary models.

Sanderson believes dinosaurs and other prehistoric creatures co- existed with humans during the time between the creation of man and the flood of Noah as told in the Bible. The Ice Age then followed the flood, he said.

Before the flood, he said, the Earth’s atmosphere was so different that animals, plants and humans were able to grow much larger and live much longer than today.

“There’s a lot of science that supports that, and that’s what we’re trying to make the case for,” he said.

Among his many pieces of evidence on display at the center, Sanderson has a casting of an original Ica burial stone. (Only 11 original stones exist, according to Sanderson, and he said he is trying to obtain one. If he does, however, he won’t display it in the center. He’ll keep it in a safety deposit box instead, he said.)

The stones portray the death of a person and are subsequently buried with that person. Holding up one of the stones, Sanderson pointed to its depiction and said, “This is a dinosaur killing a human being.”

He also showed a photograph of an Ican mummy with what he said are images of dinosaurs woven into her grave clothes.

Sanderson’s efforts are backed by a multi-member advisory board, which includes Fred Brannan, of West Akron, an engineer. Brannan and Sanderson are acquaintances through Grace Brethren Church of Norton and share an interest in creation vs. evolution.

“He’s got a wealth of knowledge on the topic,” Brannan said.

Bob Combs, pastor of the Grace Brethren Church, also is on Sanderson’s advisory board. Combs reiterated Brannan’s comments that Sanderson has a wealth of knowledge about creationism, a belief Combs said he subscribes to and believes the Bible teaches.

“I’m amazed at his passion,” Combs said. “This is such a tremendous undertaking.”

Brannan knew of a similar creation-based science center in Florida and said he was glad to hear of Sanderson’s endeavor.

“I thought that would be nice, to have something up here that portrays what the evidence says from a biblical point of view and to give that as an alternative to the typical thing that is put out there from an evolutionary standpoint,” he said.

Combs concurred, saying both he and Sanderson visited a creation research center in San Diego, and Sanderson’s center will be a great thing for the area.

“I encourage the public to come and see it, because I think they’ll be surprised at what’s been done,” he said. “It’s being done first class.”

Upon entering the center, one of the first areas guests come to is called “Assumption Junction.”

“What we want to do initially is get people looking at what the assumptions are that they’re starting from,” Sanderson said.

Visitors can view an impressive casting of the head of a Tyrannosaurus Rex found in Wyoming; a wall-mounted mastodon skeleton that was found in Newark (with 18 living organisms still in its intestinal tract, Sanderson said), and other artifacts, including matrix pieces that show imbedded bones and tendons.

There is the “pure science” section to the museum and also an area called “Opening the Doors to Truth,” which depicts the science behind the Bible’s creation story, Sanderson said.

Sanderson, a former middle school science teacher in a public school system in Clermont County, said he wasn’t satisfied with the answers he found in the theory of evolution. Instead, he developed a fascination and passion with the creation theory.

“Every time I look at the creation, I look at design — I see the coordination and the complexity, and it just marvels me,” he said.

He said he finds himself in a shrinking minority as far as his scientific beliefs.

“I think more and more, scientists are beginning to question the validity” of evolution, he said, noting that prior to the 1850s, everyone was a creationist. “Evolution is a fairly recent theory that hasn’t progressed effectively,” he explained.

Sanderson does stress he believes in “microevolution” — that species adapt to their environment over time. The idea of “macroevolution,” he said, is where the argument begins to fall apart.

“We see things staying in their own kind,” he said. “Our cells will continue to create more of ourselves.”

Of opening the center, Sanderson said: “Our mission is to pose life’s questions and open the doors to truth so visitors can find their own answers.”
He hopes visitors will open their minds to what the center offers and perhaps entertain a new understanding of the development of the world.

“It’s an opportunity for people to be stimulated to think in different ways,” he said.

The Akron Fossils & Science Center, located at 2080 S. Cleveland-Massillon Road, plans to open to the public May 26, with a grand opening slated for June 16-17.

Museum hours will be Tuesdays through Saturdays from 10 a.m. to 7 p.m. Admission is $7 for adults, $5 for children ages 2-5 and free for children younger than 2. Group rates and season passes are available.

Reservations for field trips are now being accepted. A variety of science lessons can be taught, depending on the group’s age range. The museum also will offer special services for birthday parties, special events and summer science camps.