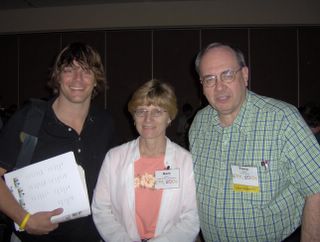 At left is Tim Willard, son of pastor William “Whitey” Willard of the Lititz, PA, Grace Brethren Church. Tim Willard was recently employed by Walk Thru the Bible in Atlanta as an editor with the publication Stand Firm.

The approximately 300 writers, editors and publishers of Christian periodicals are gathering May 7-10 for their annual meeting to learn, hear from experts, and fellowship together.

The convention formally began Monday and will conclude Wednesday night with the annual awards banquet. A few of the workshops being attended by White and Wooler include “The Next Big Thing on the Internet,” “Omnimedia Communicator,” “Digital Photography,” “Today’s Blogs,” “Storytelling for Nonfiction Writers,” “Maximizing Your Website,” and more.