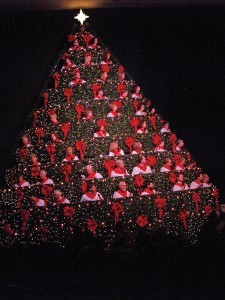 In 1974, then-Pastor Jim Custer invited recent Grace College graduate Randy Kettering to become the Worship and Music Director for the growing Grace Brethren Church of Columbus, Ohio. At that time, Pastor Jim proposed three goals for the church’s ongoing
ministries: reach as many people as possible with the gospel of Jesus Christ, involve as many people as possible in that mission, and strive to do everything with excellence because we serve the King of Kings and Lord of Lords.

With those goals in mind, in 1986 the north Columbus congregation set out to tell the story of Jesus through a clear, memorable, live experience featuring music, drama, media, as well as any other creative element that could be employed. They built two towering, 30-foot tall, steel “Christmas trees” to hold the choir, constructed huge sets to transform the auditorium into biblical-times Bethlehem, and appealed to the congregation’s giftedness to help make Living Christmas Trees a reality.

They’ve taken the production from their own facilities in the suburbs to downtown venues and back. The productions have featured a variety of animals (from camels, donkeys, and sheep to horses, birds, and boa constrictors) along with angels that come to life as Christ’s birth is announced. Each year a new script tells the neverchanging story of why Jesus came as a babe in the manger