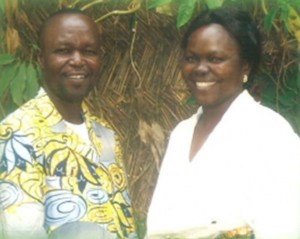 Would you like to be more directly connected to a specific, important ministry in Africa? Consider joining “Friends of Cidel,” an organization that supports and follows the work of Dr. Augustin Hibaile.

Dr. Hibaile was born into a Christian family of four children in the northwestern section of the Central African Republic. At the age of 11 he accepted Jesus as his personal Savior. Shortly thereafter, he committed his life to serve Jesus. Following high school, he attended the Biblical Brethren Theological Seminary at Bata (in central C.A.R.) and then went on to earn his Doctor of Ministry at Grace Theological Seminary, located in Winona Lake, Indiana.

Dr. Hibaile served the Bata Bible Institute and Seminary for almost 20 years as a professor. He has also been a volunteer Police chaplain from 1993 to the present. In 2005 Dr Hibaile founded a new organization called the Center International for the Development of Ethical Leadership (CIDEL) which is headquartered in Bangui, the capital of the Central African Republic. CIDEL is a ministry to those in positions of authority (2 Tim. 2:1-7).

Through the ministry of CIDEL, Dr. Hibaile has conducted seminars on ethical leadership, the prevention of corruption and other related topics to numerous government officials. Leaders from the Ministries of Finance, Justice, Defense, Public Security, Interior have benefited from his training. In addition to these workshops, Dr. Hibaile meets weekly with the country’s Prime Minister for a time of Bible study and prayer.

Dr. Hibaile is also very involved in the life of the University of Bangui, serving as a member of the faculty and offering workshops for both faculty and students.

In partnership with Pointman Leadership Institute based in California, Dr. Hibaile has conducted seminars in Ethiopia, Democratic Republic of Congo, Cameroon, Burundi, Liberia and Kenya. Church leaders are also trained in character and integrity.

Dr. Hibaile is married to Marie Helene. They have been blessed with eight biological children (four boys; four girls – ages 26 to 6 years old) and three adopted orphans who are relatives. Four of his children are at the university level, two in high schools and two in elementary schools. His wife Marie Helene is a graduate from the Bata Bible Institute. She is currently the National President of the Women of the Good News. She is involved in the ministry of True Love Waits and True Love Stays which are sponsored by a Community Development Organization.

The Friends of Cidel was founded in 2010 by a pastor (Dr. John Smith of Willow Valley, PA); Ryan Aument and Philip Weaver. Others involved in leadership in the organization include Tom Julien (Winona Lake, IN) and Forrest Jackson (West Milton, OH). To have your name added to the list, please e-mail John Smith at jsmith@gracewv.org. The group’s website is http://friendsofcidel.org