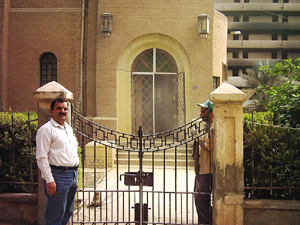 Iraqi lay pastor and church leader Maher Dakel, for whom Grace Brethren have been praying as “Pastor M” since his disappearance on September 12, is featured in the October 15 issue of WORLD magazine in an article by Mindy Belz (Mindy Belz photo of Dakel outside his Baghdad church building).

Dakel was/is a key part of the developing evangelical work in Baghdad and his potential loss is a devastating blow to the work there. Since there is no word about Dakel and his family/companions since their disappearance, please pray for his release and safe return to his ministry.

Whatever overtook Mr. Dakel and his party along that desert highway, he was until then a symbol of grit and survival in post-Saddam Iraq. A member of Iraq’s minority Mandean sect from southern Iraq, Mr. Dakel earned two engineering degrees from the University of Baghdad. He then rose through the ranks of Saddam’s coddled community of scientists and engineers to manage one of Baghdad’s largest power stations and to develop computer interfaces to run factories and public reconstruction projects following the Gulf war.

His position meant compulsory membership in the Baath Party. But minority status made him an ill-fitting bureaucrat, more so after he converted to Christianity. Moonlighting as a sidewalk evangelist-translating Scripture into Arabic, reproducing and handing out sermon tapes he received from London, and writing five books of his own about Christianity-eventually landed him in prison for 18 months.

He survived to make friends with his U.S. liberators following the 2003 invasion. And to make the most of regime change. During a December 2003 interview with WORLD at his home in the Karadat section of Baghdad, he flung open floor-to-ceiling cabinets (filled with books, tapes, and other materials) to show how thoroughly his house was ransacked prior to his arrest. Then with a hearty laugh, he said, “The worst of it was, Saddam’s thugs ate my watermelon.”

By then Mr. Dakel had served as a translator for coalition forces, as a chaplain in Baghdad hospitals, and oversaw Iraqi workers for a 3rd Infantry battalion in charge of rebuilding the Olympic Stadium. He arranged, with the help of U.S. and British chaplains, to secure St. George’s, an Anglican outpost built by the British in 1936, and set out to refurbish the church’s neo-gothic building.

From a completely defunct membership, the church acquired about 50 worshipers at its first service on the church lawn, 250 by the time services could be held indoors, and today attendance is 800, making it the largest church in Baghdad.