Cooking Cleanly Across the World 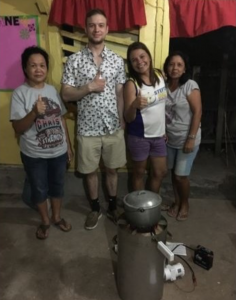 “I have been working on stove development in southeast Asia for six years now. It started in Cambodia and then God led us to the Philippines,” says Joe James, a member of Grace Church, a Charis Fellowship congregation in Ashland, Ohio (Dan Allan, senior pastor). “Now, we’re able to continue our work in the Philippines, expand to Vietnam, and back to Cambodia. Also, a stove was sent to Cameroon.”

In 2010, Joe’s father, Dave James, and the Encompass World Partners field team in Cambodia wanted to create an in-country business to provide financial support for the Cambodia National Ministry Partners. The team also wanted to provide outreach and discipleship for other Cambodians through skill training and job opportunities.

“Realizing that rice husk, a byproduct of rice milling, was a readily available, renewable biomass, and a local resource, we focused on our first idea, which was creating charcoal briquettes from rice husk for use in traditional stoves,” notes Dave. After some experimentation, the team concluded that it would not work well.

The idea then came to develop a biomass cook stove that burns as clean as a natural gas stove. They spent a week at a state university in the Philippines learning about a process called “gasification,” and how researchers were working to adapt the technology to cook stoves.

“We came back excited and started building test stoves,” says Dave. “After creating and testing many prototype designs, we found that creating a gasification stove that used rice husk as fuel (using the design from the Philippines) presented some design challenges that convinced us to look at alternative designs.”

At that time, Joe James volunteered to support the project by creating CAD drawings of the stoves. Shortly after, they learned there were others in Vietnam that were applying similar technology but with a much different stove design. They took a trip to Vietnam to learn about the stove.

With renewed excitement the team started to make test stoves designed differently than before. 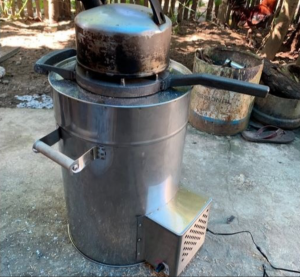 “With tweaks here-and-there we were making progress in adapting the technology to a solid working stove,” says Dave.

Joe started working on re-engineering the stove as a senior design project at the University of Akron. He continued working on research and design as he moved into his graduate program.

“Currently, we have five stoves testing in the Philippines and are expecting to have seven more stoves testing in four different countries by March 2020, Cambodia, the Philippines, Vietnam, and Cameroon,” says Joe. “A utility patent has been filed and we have a minimum viable product designed and tested. The factory in Taiwan is already tooled and ready to mass produce stoves. Our next hurdle is developing marketing strategies and connections to large non-government and government aid groups and this requires some additional funds, so we are starting another round of seed funding for $50,000.”

Through this process, Joe expresses seeing spiritual growth in himself in the form of patience and faith in God’s timing.

“I always wanted to just immediately go to the next design or the next step and if everything went according to my plan the quality of the stove we would have and the areas of impact would be very small in comparison to God’s plan,” he says. “We now have a stove that is much better than I could have imagined at the beginning and potential impact in more countries.”

Joe will be traveling to Southeast Asia in March of this year to visit four countries (the Philippines Vietnam, Cambodia, and Taiwan) to drop off cook stoves for field testing. He is requesting prayer in “seeking God’s guidance and patience as he works and showing us his will.”

[Connect:] Send Joe an encouraging note here and Dave here. Consider donating to the project through the GoFundMe page here.