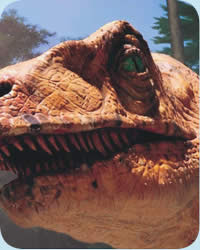 The Creation Museum, which is located in a suburb of Cincinnati, Ohio, will celebrate the one-year anniversary of its opening this weekend. The museum has surpassed its year-long attendance goal in fewer than six months. A number of Grace Brethren churches in the midwest, as well as Grace Village Retirement Community in Winona Lake, Indiana, have sponsored tours and trips to the museum. To read the remainder of the article excerpted here, click here. To see the museum’s website, click here.

This weekend, the founders of the Creation Museum will celebrate the anniversary of their one year opening with much fanfare and jubilation.

The museum, which features the Bible’s literal account of creation as aligned with natural history, has been billed a success by its founders.

Ken Ham, president and co-founder of Answers in Genesis, the founding organization of the museum, spoke optimistically of the museum’s future and his plan for expanding its operations.

“We are delighted to continue to welcome new visitors to the museum and we are excited about the future as we continue to reach new people with the creation/gospel message,” he said in a statement.

Ham said that the museum planned to build a series of parks and kiosks that would help the museum be more family friendly and attractive to younger visitors over the course of the next year. He also explained his hope for the museum as a tool for bringing people to Christ and furthering the cause of Biblical creationism.