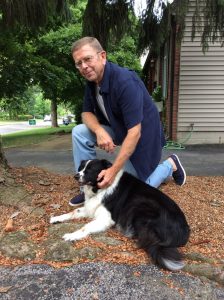 God wants us to take care of His creation,” says Mike Heisey, who retired in 2016 after more than 37 years with Columbus and Franklin County Metro Parks in Columbus, Ohio. “Reducing pollution and protecting natural resources are the right things to do because I think God wants us to be good stewards of his creation.”

From an early age, Mike recalls knowing about God and Jesus as his family attended a small country church in southeastern Pennsylvania. “I even ‘went forward’ during a special opportunity for children, but I didn’t really understand what that meant until many years later,” he remembers.

After graduating from Pennsylvania State University with a degree in ornamental horticulture, he reunited with old friends who were growing Christians and who lived their faith before him in what he describes as a winsome manner. “ Through them, I committed my life to God’s plan,” he says.

It wasn’t long after that that he accepted a position with Metro Parks and moved to Columbus, Ohio. A co-worker told him about the Grace Brethren Church, now Grace Polaris Church (Mike Yoder, lead pastor). He joined the church, met his wife, Beth, there, and they have been active members for more than 40 years. (He is a long-time member of the Trustee Commission.)

He arrived in Columbus just as his faith was taking hold in his life. “The transition became my first really big decision for which I recognized that God had a plan for me,” he says.

With the years, his job and responsibilities grew. He spent 20 years as the horticulturist at Inniswood Metro Gardens in Westerville before taking the park manager position at the newly-created Glacier Ridge Metro Park in Plain City.

Through it all, his faith played a role, regardless of the situation.

“Knowing that God remained in control regardless of what was happening around me provided tremendous stability and peace,” he stresses. “If I was viewed positively by the people around me, it was due to Christ’s presence in my life.”

He considers himself an environmentalist, believing that stewardship of God’s creation is foremost. While he frequently worked with people whose environmental interests were based in science and “politically correct” thinking, he says that he never felt at odds.

“My faith enhances my appreciation of nature and the world around me and was the day-to-day context for my approach to my job,” he adds.

“God’s presence and active guidance in my life provided a solid foundation for my career. It was a privilege to serve as His caretaker.”