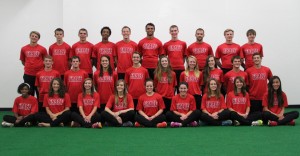 The theme for Grace’s cross country team in 2014 is sunathleo, which means “striving together.”

Head coach Jeff Raymond’s desire is that the Lancers’ striving together as a larger unit will result in improved times for each runner this fall. Sunathleo.

“I’m excited for the season because of the type of people we have on the team,” Raymond said. “It’s fun to work with them each day, and the team members genuinely enjoy being around each other. That type of team cohesion will lead to better results as we challenge each other.”

On the women’s side, the Lady Lancers return the majority of last year’s top-five runners. Senior Jenna McClellan, sophomore Katelyn McCullough and juniors Alexis Nelson, Megan Gast and Creigh Ogle were Grace’s top finishers in the 2013 Crossroads League Championships. McCullough finished in 20:04 as a freshman.

Three new Lady Lancers will be added to the roster in 2014. Emma Mitchell, McCallah Mast and Aletheia Burritt have potential to be in the top group as freshmen, according to Raymond.

“Right now we are not focused on team places or individual times. Our focus is on continually challenging ourselves to get better and not settle,” Raymond said. “If we are able to consistently push ourselves out of our comfort zones, I know we will be ready to perform well in the big meets at the end of the year.”

The Lancers open the season on Saturday at the Goshen Hokum Karem.