Crossing the Line and Walking in Someone Else’s Shoes 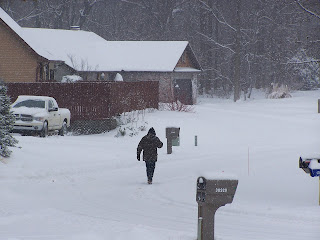 What would it take for you to “cross the line” for Jesus? Greg Serafino, pastor of the Osceola, Ind., Grace Brethren Church, wondered the same thing a few weeks ago as he prepared to preach about reaching others.

“Often we are willing to throw people a line,” he observed, “but they (the people who catch it) have to cross our line (into our world).”

As he looked for an example that would make the point, it was suggested that he “cross the line” and live for several days as a homeless person. “(Christians) will serve in a homeless shelter, but we really don’t want to have contact with those people. How do we get people to cross that line?” he questioned.

The last week in January had been particularly cold and snowy in northern Indiana. But it didn’t deter Greg from setting out one Friday morning to live the life of a homeless person. (See photo above.) He wore boots, three pairs of socks, several shirts, flannel pants under his jeans, a heavy coat, and gloves. He carried a small hunting knife, a pack of matches, and his cell phone (a concession to his wife, to be only used in emergencies). He had five dollars and his driver’s license.

For the next two days, he experienced what it was like to be one of the invisible people, asking for food or work, staying at a shelter, depending on his own power to get from place to place, sleeping under the stars, and, even, diving into trash dumpsters. (To read the complete story about Greg’s endeavors, click here.)

His weekend ended as he entered the Apple Road church shortly before 11 a.m. on Sunday to share about his experiences and to encourage his congregation to cross the line to minister to others. It had been two and a half days since he left home and he was wearing the same clothes. He had only showered once, on Saturday morning, at Elkhart’s Faith Mission.

The experience gave him a new appreciation for ministries to the down-and-out. “I can’t drive by someone walking along the road anymore,” he says, recalling the tattooed and pierced young man who gave him a lift during the weekend. “I’ve been there,” Greg remembers him saying.

“I’m not so quick to judge somebody’s condition and to blame them for it,” he added. He also recalls how Christ crossed social barriers to minister to others. “It’s okay to step into their world,” he concluded.