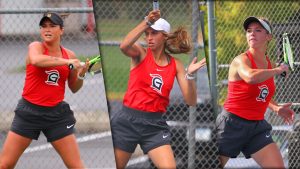 The Lady Lancers had three players appear on the All-Crossroads League Team as well as winning the league’s Coach of the Year.

Marcus Moore was tabbed as the CL’s Coach of the Year. He led the Lady Lancers to an 11-3 mark in the fall, securing the second-most wins in a single season as well as the second-highest winning percentage in team history.

Emily Mast, Carrie Copeland and Dayana Ortega all landed on the All-League Team for Grace. It marked the first time the Lady Lancers have had three All-League winners in the same season.

Mast and Copeland ended their careers in impressive fashion. Mast, who played as Grace’s No. 1 singles and doubles ace throughout her career, posted a 20-8 record this fall. She was 10-4 at both No. 1 singles and No. 1 doubles.

Copeland played at No. 2 doubles and No. 2 singles all season, producing an overall record of 20-7. She was 12-2 in doubles’ play with Jayna Armstrong and went 8-5 at No. 2 singles.

Copeland and Mast will both end their collegiate careers with 35 singles’ victories, good for No. 6 all-time for Grace.

Copeland amassed a career record of 82-35, marking the second-most wins in team history. Her .701 winning percentage ranks No. 5 in Grace’s record books. She graduates with 47 doubles’ victories, most in Grace’s history.