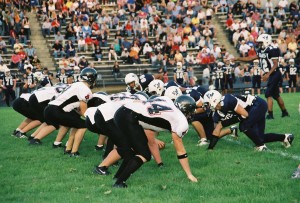 Some players from the Columbus Crusaders football program have gone on to play at the college level. Families from more than 40 churches are involved in the program, coming from all over metropolitan Columbus. (Brian Bayless photo)

By Liz Cutler Gates
Crusader Football’s roots are in a challenge issued during a Sunday morning sermon. It has grown into a region-wide program which now involves nearly 300 families and includes a football team, cheerleaders, and a marching band.

But Crusader Football is more than sacking opponents, rooting for a team, and leading the fight song. It’s about encouraging young men and women to develop biblical characteristics such as commitment, honor, and responsibility.

“Pastor Jim Custer preached a sermon where he talked about how not everyone had to be a missionary or a preacher,” recalls Mike Cheeseman, a member of the Grace Brethren Church of Columbus, OH, for more than 25 years. “He said you should take whatever talents God gave you and use them to minister to people.”

A carpenter by trade, Cheeseman accepted the challenge. He wove the concept into his construction business and participated in ministry opportunities where he used his building skills.

Even as his children attended Grace Brethren Christian Schools, a ministry of the Columbus church, he and his wife, Betsy, would go to football games at a local public high school.

“They had a so-so team,” Cheeseman recalls, “but we’d notice how the community would support them.” The couple began to consider how football could be used to preach the gospel, combining a passion for the sport with a desire to minister. “It’s not so much in what you’re saying or preaching, but in how you play the game,” he notes. 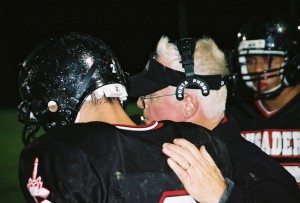 Mike Stanley, right, a member of the Grace Brethren Church of Columbus, Ohio, since 1987 and a former high school coach, sold his interest in several Columbus-area McDonald’s restaurants and in 1999 joined Crusade Football as head coach.

By 1996, Cheeseman and fellow Grace Brethren Church member Tom Ensign decided to begin a football program where their sons could participate. They enlisted two additional coaches and 22 players for a 6th and 7th grade team to play in a Central Ohio club league. They thought the group would be a precursor to a football program at Worthington Christian Schools, where their sons attended. But Cheeseman now knows God had bigger plans