When Gladys Deloe started collecting crystal creamers, she never dreamed they would someday open the door for a ministry that is affecting the women of her entire county.

Gladys, a long-time member of the Winona Lake, Ind. Grace Brethren Church (WLGBC) (Bruce Barlow, lead pastor) and former WMC/WGUSA leader, had a vision for helping working women live out their faith in their workplace. The idea had been filed away for several years.

Recently, she had another idea; to spend time with a special friend and give her a creamer from her collection. One of those friends was Susie Light, executive director of the Kosciusko County, Ind. Community Foundation.  As they talked, Gladys shared her dream of a gathering for working women. Susie told her, “You should meet Jeri Purdy.”

Shortly after that, Gladys was talking with a businessman friend who led a monthly men’s Bible Study Breakfast group in the community and mentioned her dream of something like that for working women. He told her, “You need to talk to Jeri Purdy.” Gladys observes, “It didn’t take long for me to know that the Holy Spirit was telling me that I should meet Jeri Purdy.”

She arranged a meeting with Jeri, executive director of Intercession Group, and her friend Julie Kline, the CEO of a large, local company.  During that meeting, they shared with Gladys that they had been praying about starting something for working women in the area. They agreed to seek out a few other women to form a planning team. As the team developed, Gladys was overjoyed to realize it encompassed almost five generations of women.

In the fall of 2018, WLGBC offered ten $1000 grants to anyone with a plan for outreach into the community. Gladys submitted her idea for “roundtable lunches” for working women, and in September, at the 75th anniversary celebration of the church, she was given one of the grants. This gave the team some seed money to get started and was confirmation that the idea was, indeed, from the Holy Spirit.

The team hosted their first gathering in February 2019 at a 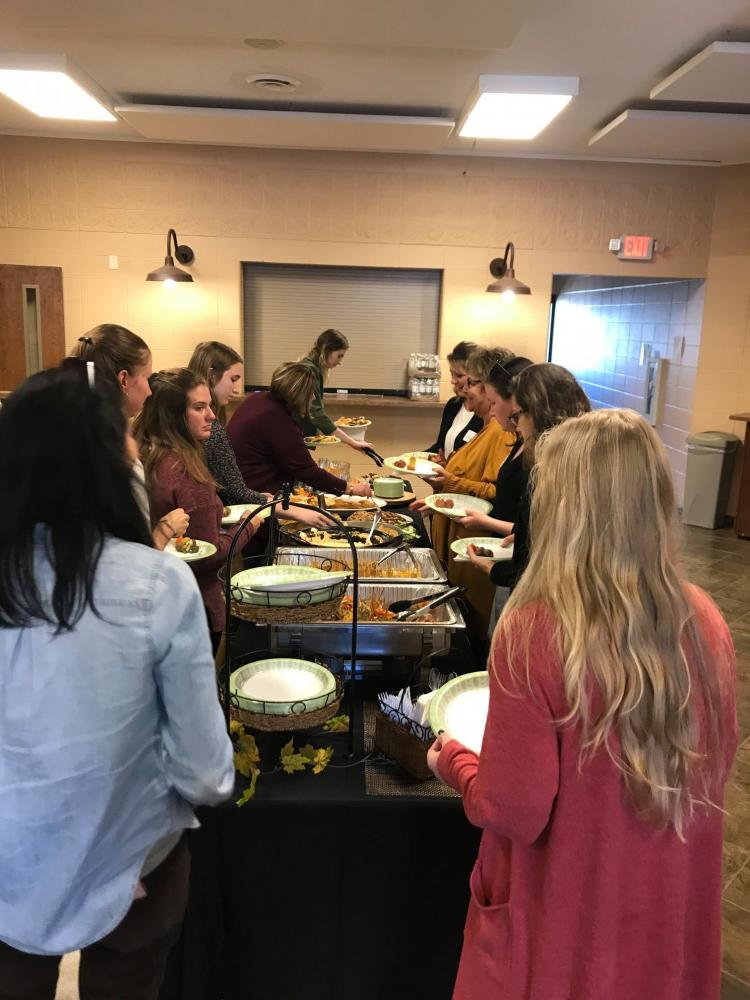 private room in a local grocery store. Initial contacts had been made by each woman on the Leadership Team, personally inviting a group of their friends from work, in the community, or their church. The next month, the 40-person room was filled, with standing room only. They then moved to the community meeting room on her church campus. They have been averaging about 70 women and anticipate pushing 80-90 as they begin 2020. Now, word of mouth and Facebook are the only advertising they need.

The “Lunch ‘N Learn” Roundtables, held over lunchtime to minimize the amount of time working women have to be away from their families, offer good opportunities for women to get acquainted, as well as focusing on topics they face in today’s workplace environment. The discussions have ranged from a panel on The Gender Gap, an interactive presentation from Dr. Christy Hill from Grace Seminary on Deepening Relationships, an orthopedic industry vice-president speaking on Diversity, and a counselor sharing about managing stress and anxiety. In addition, they often feature a local non-profit, or vendors who set up “Pop-up Shops.” One shop, for example, featured jewelry, purses and clothing manufactured by women who had been rescued from trafficking. The vendor returns all monies to the ministry that employs the women.

“One of the benefits of this location is that there are not a lot of logistics to worry about,” shares Gladys. “Our venue sets up and tears down at no charge because this is a ministry. We use local businesses to cater, and the women pay a nominal fee for their meal when they register online.  Any leftover food is donated to the local homeless shelter.”

Gladys and others on the leadership team are encouraged to see how much the gatherings are meeting their goal of encouraging women to use their influence in their avenues of business, non-profit, and relationships. She offers a few tips for those who would like to begin a ministry to women in the workplace:

Gladys recommends “being intentional about helping women be intentional.” “It’s not so much about figuring out the right thing to say, but about being trusted, the kind of person another co-worker would come to when they have a need.”

Officially called “Women in the Workplace,” the group has a Facebook presence to keep individuals up to date, as well as sending email updates. Information can also be accessed through The Intercession Group’s website at intercessiongroup.org under “Groups We Support.”

This edited story was written by Vicki Rife, the executive director of Women of Grace USA, and was originally featured in an issue of Grace Touch.