Curtain Ready to Rise on Spring Musical at Grace College 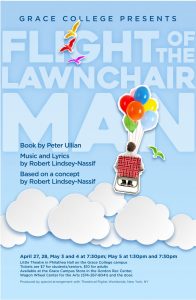 Grace College’s theater department is pleased to present “The Flight of the Lawnchair Man” on April 27, 28 and May 3, 4 and 5 in the Little Theatre, located in Philathea Hall, 1499 Alpha Dr., Winona Lake, Ind. Tickets are $10 for adults and $7 for students and seniors. They are available for purchase in the Campus Store in the Gordon Recreation Center, at the Wagon Wheel Theatre box office (574-267-8041), and at the Little Theatre door. Performances will take place every night at 7:30 p.m., and also at 1:30 p.m. on Saturday, May 5.  The production is open to the public.

While “The Flight of the Lawnchair Man” is not the most well-known musical, it was ideal for Mike Yocum, Grace College professor of communication and director of the spring musical. “Newer shows that fly under the radar provide lots of opportunities for our cast to get creative,” Yocum said. “The audience will love the music and unusual props. It’s a great show for the entire family.”

“The Flight of the Lawnchair Man” is based on the true story of a man, Larry Walters, who just wanted to fly. He rises above opposition and setbacks to achieve his dream with the help of 42 weather balloons and a lawnchair. It began as a one-act in “3hree,” a collection of three musicals, but has been expanded into its own full-length production.

Marc Baldwin, a senior at Grace College, plays the feature role of Charles Lindbergh. He’s no stranger to the stage, appearing in every production at Grace College since the spring musical of 2015. He is excited to share the show’s humor with the audiences. “So many lines drop me dead with laughter,” Baldwin said. “Having two members of Grace’s improv group just escalates the hilariousness.” Baldwin, however, doesn’t want the message to get lost in the humor. “I hope that the audience understands the importance of pursuing our dreams, no matter how ridiculous they are,” he said.

For more information about “The Flight of the Lawnchair Man” or the theatre department at Grace College, please contact Mike Yocum at yocumml@grace.edu.