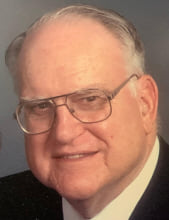 Dr. Dale Ulrich, the last surviving member of the founding board members and a key figure in the growth and development of the Brethren Encyclopedia project, has died.

Dale, who as an academic made his career at Bridgewater College, for many years was secretary of the BE board and always gently offered guidance based on his institutional knowledge of the founding and mission of Brethren Encyclopedia.

He will be greatly missed, but his memory will be honored and long remembered for all he did to make Brethren Encyclopedia a success. Here is his obituary:

Dr. Dale Vernon Ulrich, 89, of Bridgewater departed this life on March 3, 2021, at Bridgewater Retirement Community. He was born on March 1, 1932, in Wenatchee, Washington, to Herbert E. and Esther Webb Ulrich. In 1953, he married Claire Marie Gilbert Ulrich, who was his partner for 57 years until her death.

Dale learned a strong work ethic in the family orchard business. Inspired by an outstanding science teacher, he was the first in his family to graduate from college. He went on to earn a Ph.D. in physics at the University of Virginia and had a 38-year career as a professor, academic dean, and provost at Bridgewater College. He influenced many students, faculty, and staff through his caring spirit, commitment to educational excellence, and thoughtful integration of science and faith.

A lifetime member of the Church of the Brethren, Dale was passionate about the college’s service to the church and the church’s service in the world. Early in his marriage to Claire, they joined Brethren Volunteer Service, codirecting a community development project in inner-city Baltimore. They often engaged in international travel and hospitality to build mutual understanding and peace. He also served the community and world as a member of Rotary International in Bridgewater.

Love blossomed again after Claire’s death, and in 2012 he married Doris Metzler, who survives him. He is also survived by a sister (Shirley Heckman), 3 children (Vernon Ulrich married to Pamela, Daniel Ulrich married to Paula, Sharon Wilkinson married to Jay), 6 grandchildren, and 4 great-grandchildren. The family plans to hold a memorial service at the Bridgewater Church of the Brethren later this year when it is safer to meet in person. Memorial gifts may be made to the Bridgewater Church of the Brethren.

For more information on Brethren Encyclopedia, log onto brethrenencyclopedia.org.