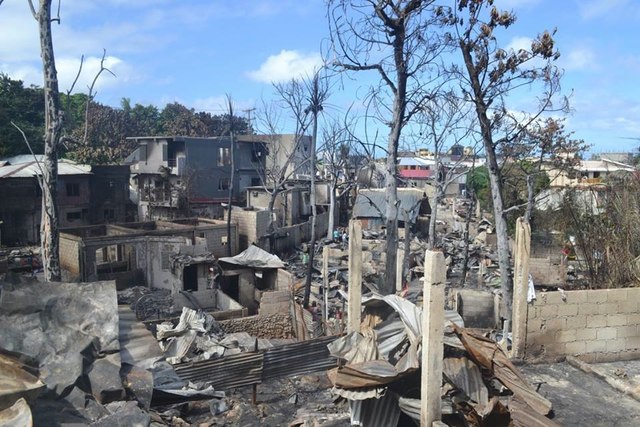 AFTERMATH. The Christmas eve fire in Boracay has been attributed to “electrical connections.” Photo by Alan Palma Sr. / Rappler

Damage caused in a Christmas Eve fire on Boracay Island has reached P10 million, according to ABS-CBNNews.com. The fire apparently started in a boarding house and was spread by the wind over the neighborhood.

Grace Brethren missionaries Dan and Tori Beaver operate the First Love Ministry Center on Boracay, which was damaged in the fire. According to reports, the fire stopped at the First Love Center, which saved much more damage and perhaps lives.

In a letter to supporters, Dan and Tori report that the ground floor of the three-story building has been burned, including the school resource room, library, and personal storage. All the school’s books and computers were destroyed.

On the second floor, windows were broken out to allow the heat and flames to escape and so the fire department could get water lines in. Classrooms received moderate damage.

The third floor had, perhaps, the most devastating damage, destroying the teacher’s housing, including their personal items, and all the electrical supplies and tools for ongoing construction projects on Boracay and Panay.

The office, with student, financial, and teacher records was spared.

Staff is working to restore the second floor and teachers housing in time for classes to start in January.

Below is a portion of the report from ABS-CBNNews.com. Click here for the complete story.

MANILA – The cost of damage from the fire that razed some 40 houses in Barangay Mano-Manoc, Boracay island Thursday, has reached P10 million.

The Bureau of Fire Protection (BFP) said majority of the houses affected in the incident were owned by Muslim businessmen.

The blaze at Sitio Ambulong also gutted a boarding house.

About 84 families or 350 people lost their homes to the fire, according to the municipal Social Welfare Office.

Authorities are still investigating the cause of the fire.

‘Electrical connections’ seen as cause of Boracay fire

BORACAY ISLAND, Philippines (rappler.com)– The Bureau of Fire Protection (BFP) Boracay is looking into “electrical connections” as the potential cause of a Christmas Eve fire in the densely populated area in Boracay Island.

BFP Boracay Fire Officer I Jose Marie Vincent Torre said witnesses saw the fire start at the three-storey residential house of an Aiza Mambuay. The fire started at 10:50 a.m. and was put out officially at 2:45 p.m. on December 24.

The fire developed along the main road of Sitio Ambulong in Barangay Manoc-Manoc. It then spread quickly to neighboring houses made of light materials and gutted more or less 50 structures.

“Gin admit man ni Aiza na idto naghalin ro ka-eayu. Mayad eang nakaguwa ro unga na 11-year old na naga-katueog (Aiza admitted the fire started in their house.Her 11-year old physically disabled son who was sleeping was fortunate. He was able to get out of their house during the fire incident),” he said in a dialect.

The damages have been pegged initially at P10-million. No casualties have been report. At least 10 persons sustained injuries. BFP said the investigation is ongoing, but single out “electrical connections” as the main cause.

In the meantime, at least 80 families were temporarily evacuated to the Barangay Manoc-Manoc evacuation center.