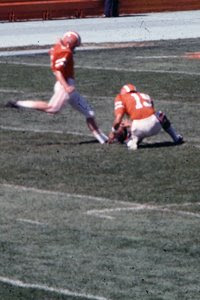 Dan Beaver, global associate with Grace Brethren International Missions (GBIM) who serves on the island of Boracay in the South Pacific, will be honored on the weekend of September 5 and 6 at the Illinois Renaissance Celebration at the University of Illinois, where he played football.

According to his proud dad, Wayne Beaver, Dan will be among those recognized as having been the ten top players in ten different positions on the various football teams in over 100 years of Illini football.

“One of the ten is Red Grange,” says Wayne, who is a former GBIM missionary and faculty member at Grace Theological Seminary. “He held the record for most points earned during his collegiate years for over 50 years. Dan broke his record with points scored as result of his place kicking in his four years at the university. Another of the ten is Dick Butkus, who will be there and is well-known in football circles.”

Dan will be honored as the best place kicker. During his four years at Illinois (from 1973 to 1976), he kicked a number of recorded field goals over 50 yards (50, 52, 52, 55, and 57 yards). During his freshman year, as Illinois played Purdue, Dan scored five field goals, earning all the points, to beat Purdue with a score of 15 to 3. The same year, as Illinois played Michigan State, Dan scored three field goals, earning all the points, to beat the Spartans with a score of 9 to 3. He was a two-time All American and was selected to play in several post-season games. His 57 yarder is still a school record for the longest field in Illinois record.

While at Illinois, he was president of the local chapter of the Fellowship of Christian Athletes.

The top ten athletes will be introduced on the field during the Illinois vs. E. Illinois game at Urbana-Champaign on September 6.

“We were thankful for the four years of a football scholarship that Dan got at Illinois, we being poor returnees from the African mission field at the time!” recalls Wayne. “Also we are thankful for the 19 years, he and Tori have spent as missionaries in the Philippines.”

Dan and his wife, Tori, have served in the Philippines for the past 19 years with GBIM and First Love International Ministries.