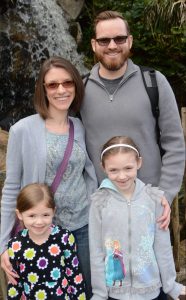 Dan and Jessica Gulnac and family

Dan Gulnac has been named the pastor at Grace Church, Palmyra, Pa. He assumes the pulpit on July 1, 2018.

Born and raised in western Pennsylvania, Dan is the son of a pastor and a school teacher. He surrendered his life to Christ at age 9, and at 16 years old, he felt the Lords call to full-time ministry, but “ran” from the call until later in life, he says.

Dan attended Shippensburg University and after 9/11/01 he decided that he wanted to serve his country by becoming a police officer in the Washington, D.C. metro area. He spent the next 10 years in law enforcement, but he notes that the latent call on his life did not go away. In 2010, he finally surrendered to God’s call on his life to become a pastor. He entered seminary in 2011. ultimately earning two Master’s Degrees, one in Biblical Studies, and the other in Missiological Studies. Since transitioning into full-time ministry, he has served as a worship leader/youth pastor, a teaching pastor, and a lead pastor.

Dan is also part of the Northeastern Chapter of the Navigators, assisting churches and pastors in establishing disciple-making and missional cultures within their local churches.

Dan believes God is passionate about creating disciple-making cultures within the local church and also building relational bridges between the church and the community so that the local church would be missed if they ceased to exist. He is married to Jessica, his wife of 14 years, and they have two children Lydia, 8, and Madilyn, 5. He and his family love the Palmyra area, and long to see the people of Palmyra, Hershey, and the surrounding region reached with the Good News of Jesus Christ. They are excited to become part of Palmyra Grace and the Charis Fellowship!