Daniel Barbitta, Recovering, is ‘Left Speechless’ at the Outpoured Love

Daniel Barbitta, who for many years has led the Grace Brethren work in the South American country of Uruguay, has recently been seriously ill and spent an extended time in the hospital.  Gary McCaman, with Encompass World Partners in Argentina, reports that Daniel is celebrating New Year’s Eve at home and wanted to update those who have been praying for him.

Dear brothers and sisters in Christ, friends and colleagues…

Many years ago Benjamin Navarro challenged me with 1 Corinthians 4:1.He helped me see the importance of being a faithful steward and said that God was not looking for successful men, but rather faithful men. I believe that this has been one of the most difficult tasks in my 30 years of ministry. 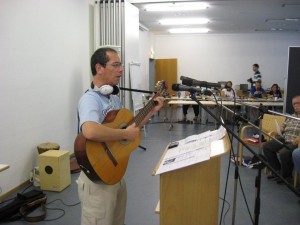 Daniel Barbitta, known for his cheerful personality and musical leadership, was one of the worship leaders at the Charis gathering in Bad Homburg, Germany, in 2008 during the 300th anniversary of the founding of the Brethren movement.

The work in Uruguay has never been characterized by large numbers, but I never saw that as a failure. My main concern has always been my responsibility for the group that God gave me to minister to. We have lived through many different stages, and in these last nine days of hospitalization my family and I have profoundly experienced again the grace of God through our “little group” here. The outpouring of love toward my family and me has left me speechless.

Carlos and Graciela left their house and arrived at the emergency room at the same time that I arrived in the ambulance. They were ready to stay there with Gaby as long as necessary, and, of course, they brought their mate!

The first night that I could have visitors, so many people came in to see me that the nurses asked me “Who are you?” Noreen spent the night at our place with Gaby, and she was even willing to sleep on the floor! (And if you know her, you know that, well, she isn’t as young as she used to be!)

Delma, my dear older sister, who lost her daughter after a cruel battle with lupus, was always around with a bag of apples because she knows how important they are for my diet. That was her great love offering for me.  Doesn’t that offering sound familiar?

The young marrieds came to drink mate with me after a long work day (Ana, Marcos, Yanet, Ariel)! To all of them I say THANK YOU!

My kids are very moved by the number of emails that arrived from different parts of the world, the love gifts that were so timely, the powerful prayers (which were greatly felt), as well as every verse and greetings from people we hardly know but form part of this beautiful brotherhood. Not to mention the hundreds of fellow believers who prayed and wrote who didn’t know us at all!

Therefore, I’m beginning 2012 with a grateful heart and with many challenges, but with the assurance that God is at our side and will complete the good work that He began.