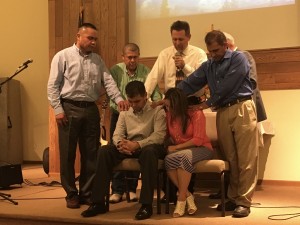 Daniel and Alicia Morales as Daniel was installed as pastor of Fuente de Vida Church. On the platform with the Moraleses are: Carlos Gonzalez, Carlos Valenzuela, Brian Baughman, Gene Lambright, and Jaun Quintana.

According to founding pastor, Brian Baughman, Daniel and his wife, Alicia, both grew up in pastor’s homes in Mexico. They also both attended and graduated from a Bible institute there. A part of the Fuente de Vida Church for eight years, Daniel has been one of the main adult Bible teachers, the worship leader and an elder. Alicia has been a leader/teacher for the women’s ministry, a big part of the children’s ministry, and a deaconess. For the last year Daniel has been the elder in charge of the ministry and during that time the board came to the decision to pursue him as the new full-time pastor, which he accepted.

“Tammy and I have been thrilled to see the church come full circle to the point where they have their very own Hispanic leadership in place, fully operating and growing,” says Brian. “We are really proud of this couple and this local church. The Lord has led them through a lot of difficult seasons and they have been faithful to persevere in the Lord and continue reaching the lost and raising up disciples. We look forward to seeing what God will do through them in the years to come.